Stories from the Archives: CKCU

To celebrate Carleton University’s 75th Anniversary, Sherri Sunstrum – a cartographic specialist at the MacOdrum Library – tapped into Carleton’s rich trove of archival images to produce an interactive online story map called Visualizing 75 Years at Carleton University. The story map uses a series of maps allowing people to navigate through an image-rich timeline detailing the evolution of Carleton. We’ll be compiling some of those stories on CU75.ca, but be sure to take a look at the map here.

On November 15, 1975, DJ Steve Colwill (who went on to be program director with CHEZ 106) played “You turn me on (I’m a radio)” to commemorate the opening of CKCU 93.1 FM, Carleton’s campus community radio station. This opening was the culmination of 10 long years of effort.

A group of students came up with the idea for a campus radio station in 1963. By 1965, they had secured airtime on CKOY (now 1310News) for a campus news show, but it quickly turned into a show about public affairs in Ottawa.

And with that, came controversy. In 1966, after a would-be bomber accidentally detonated an explosive device in a parliamentary washroom, Carleton students decided to test out the security in the House of Commons. They smuggled in recorders and taped excerpts of conversations between politicians. After the students played these tapes word-for-word on CKOY, station executives were not happy and censored the group.

When Carleton’s University Centre opened in 1970, the group blocked space for a true campus radio station and CKCU was born.

The station, known affectionately by its hosts, supporters and fans as “The Mighty 93.1”,  celebrated 40 years at Carleton University in 2015. 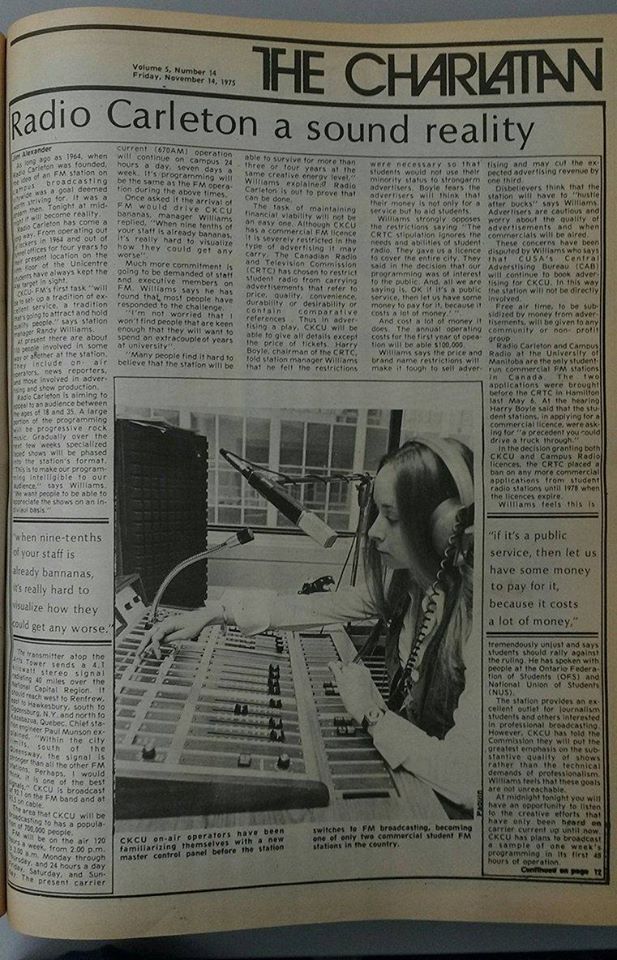