A high-quality PDF of this report with references is available for download.

A broad scoping review was undertaken to identify literature regarding rural youth health in Canada, Australia, and Sweden. The studies were coded according to population focus, health focus, access, and general. The scoping review produced the Rural Youth Health Scoping Review Database, which provides an overview of the available research on rural youth health.

STATE OF THE RESEARCH 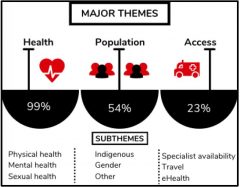 Physical health was researched most for rural youth, followed by mental health. Sexual health, substance use, and recreation were also included in studies, but were studied much less than the first two categories.

More than half of the articles included in the database focused on specific populations. Indigenous peoples and gender studies were the most prevalent categories, followed by refugees/immigrants, LGBTQ, and racism.

Codes related to access to care included travelling to receive healthcare, waitlists limiting access, recruitment and retainment of health care professionals, eHealth initiatives, and specialist availability. Specialist availability was the most studied category, with 71 articles mentioning specialists in the abstract. Travel and eHealth were also prevalent topics, with a smaller number of articles discussing waitlists and recruitment and retention. 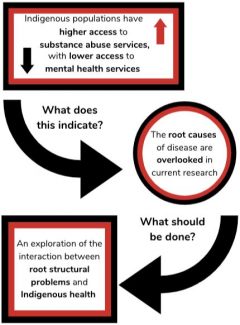 A higher number of studies on substance abuse in Indigenous populations have been conducted compared to the general population, while the general population has an increased number of studies regarding mental health. The findings suggest that the root structural causes of health issues, such as racism and mental health, may not be sufficiently and properly studied (6,7). Additionally, although suicide is often portrayed in the Canadian media in reference to Indigenous youth and Indigenous communities, the rates of studies regarding suicide in Indigenous-specific abstracts and general abstracts are proportionally the same. In order to improve the current state of research regarding Indigenous youth health, an exploration of the interaction between root structural problems and Indigenous health should be conducted.