Dr. Sean Landsman, has received a Highly Commended award for this image of rainbow smelt migrating at night in the 2020 Underwater Photographer of the Year competition. https://underwaterphotographeroftheyear.com/winners/2020-winners/ 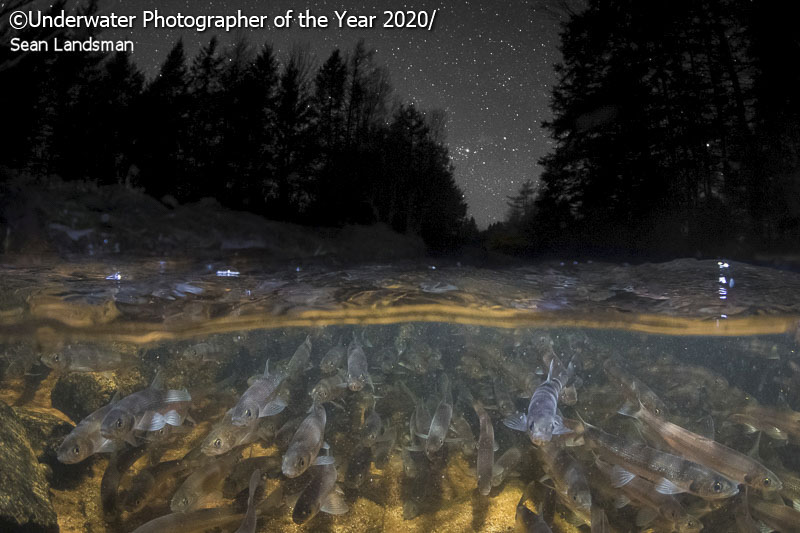 The rainbow smelt is an anadromous species of fish that spawn in freshwater and grow in saltwater. Smelt enter coastal North American rivers and streams in early spring as they head toward their spawning grounds. Unfortunately, dams can impede or outright block access to these areas. This species’ movement patterns, their nutrient contribution to stream food webs, and the ability of fishways to allow smelt access to habitats above dams was the focus of my PhD research. Smelt tagged with small microchips also revealed that their upstream movements often occur at night, which this image accurately represents. It is a double exposure made in-camera and taken at the same time and place. I was inspired by Audun Rikardsen’s incredible portfolio, including many of his split-level double exposure images. This image has significant personal meaning as it embodies years of research during my PhD and many milestones in between.

Judge’s comment: It is nearly always best to write judge’s comments after the photographer has submitted their back story but with this shot it’s interesting that all the judges could feel the effort that must have gone into this shot. It is perfect reportage in a single image.
– Peter Rowlands