Home / News / Event report: Localization: What? Why? How?

Event report: Localization: What? Why? How?

On the eve of the Global Refugee Forum in Geneva, LERRN partnered with the IDRC and Asylum Access to host a roundtable on “localization” and the importance of local actors in guiding refugee responses. The event brought together eight dynamic partners for a discussion at the Geneva Press Club on 16 December 2019. 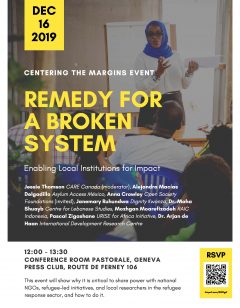 The event built from commitments made to the localization of humanitarian action, stemming from the 2016 World Humanitarian Summit, the Grand Bargain commitments, the 2016 New York Declaration and the 2018 Global Compact on Refugees. While there remains a commitment to work more substantively through local actors – national NGOs, refugee-led initiatives, and national academics – significant barriers remain.

The event sought to unpack some key questions: What is localization? What is its value and importance? And how can localization be enhanced through practical steps to improve the efficiency, effectiveness, and impact of refugee responses in the global South, which hosts 80% of the world’s refugees?

To answer these questions, the event featured insights from a critical group of actors who have experience in the challenges and opportunities that derive from localization, speaking from the perspective of donors, an international NGO, a national NGO, academics based in major refugee-hosting states and refugee-led organizations: 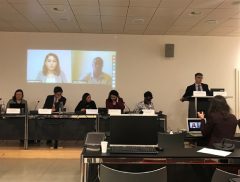 The discussion identified key issues that need to be addressed for progress on localization to be realized. Participants noted the range of interests held by larger, international organizations and actors, and the extraordinary imbalance in power relations between such actors and local actors. A number of speakers spoke to the practical barriers that need to be addressed to enhance localization, from the registration of local organizations to the capacity of such organizations to meet the reporting requirements of external donors.

More critically, speakers identified the immense value that local actors bring to refugee responses. Local actors have more nuanced understandings of local contexts, have networks and connections that can be mobilized to advocate for change, are seen as more legitimate by nationalist and populist governments, and remain in the country long after the spot-light has faded and international attention has waned. Given that refugee situations now last an average of 20 years, this sustained presence is increasingly important.

Speakers also identified the need for donors to provide more holistic funding to local organizations and to demonstrate a willingness to take informed risks when supporting national institutions. All agreed that such support has the greatest potential to be transformational in its impact.

Ultimately, the event highlighted the central role of power. Change will be limited so long as relationships remain rooted in old power asymmetries. Instead, participants called for a more inclusive and participatory approach to power that raises the capacities of all actors and enables them to work together to affect change.

Jessie Thomson summarized this change in her comments by quoting from this piece from the Harvard Business Review:

“Old power works like a currency. It is held by few. Once gained, it is jealously guarded, and the powerful have a substantial store of it to spend. It is closed, inaccessible, and leader-driven. It downloads, and it captures. New power operates differently, like a current. It is made by many. It is open, participatory, and peer-driven. It uploads, and it distributes. Like water or electricity, it’s most forceful when it surges. The goal with new power is not to hoard it but to channel it.”

“Localization” has become a central theme in development and humanitarian policy and practice, especially since the World Humanitarian Summit in 2016. The need to engage host communities, refugee communities, and national actors across the humanitarian and development fields is equally central to the Global Compact on Refugees (GCR), which was affirmed by the UN General Assembly in December 2018. The GCR is premised on the understanding that responses to refugees are best pursued in partnership with host communities and in response to local conditions, opportunities and interests.

These priorities all stress the importance of multi-sectoral approaches to displacement, with responses integrating development, humanitarian and peacebuilding programs. They also highlight the need to situate refugee responses within analysis of local markets and economies, develop programs that benefit refugees and host populations, and relate to host state policies on employment and education. They also speak to the critical importance of building and sustaining political will in support of lasting and rights-based solutions, and the need for responses to account for social and cultural realities.

As argued by Asylum Access in their report on National Governance Frameworks for Refugees, refugees and the local civil society organizations that support their inclusion are among the key actors that can inform and advise host country policy. Refugee voices combined with knowledgeable, connected and locally-led NGOs are uniquely positioned to provide host governments with technical assistance on legislation, argue persuasively for policy reform based on evidence and practices, and bring refugee voices to the table. Currently, such groups are totally underutilized. Greater funding and participation for locally-led advocacy organizations and refugee representation will help achieve more effective governance frameworks for refugees.

Likewise, localized knowledge and sustained research capacity in regions of refugee origin is a vitally important foundation for such localized responses to displacement, yet it is critically under-supported and often lacking in capacity in key refugee-hosting regions. While 80% of the world’s refugees remain in their regions of origin in the global South, well over 85% of the dominant, published academic research on refugees and forced migration originates from scholars and research centers in the global North. The concentration of research capacity in the global North perpetuates this trend, while support for research centres in refugee-hosting regions in the global South has largely been crisis-driven and unsustainable.

More localized research and engagement on refugee issues can contribute to more effective policy and practice, especially given the complex dynamics of displacement in fragile contexts and the need to integrate refugee responses into local, national and regional development and peacebuilding strategies. The renewed emphasis on promoting self-reliance for refugee and integrated responses that include the needs of host communities mean that effective responses to refugees require localized and granular understandings of local dynamics, economies, markets and development agendas.

In fact, local institutions are critical contributors to the “whole of society” approach, as articulated in the Global Compact on Refugees. Experts by virtue of their long experience navigating local contexts, there is an overwhelming body of evidence that local institutions instigate positive long-term outcomes for refugees and host communities. However, most local institutions struggle without core funding, causing gaps in response and adding weight to host governments. In contrast, the vast majority of published research on refugees comes from academic institutions in the north, despite the interest and deep knowledge of local researchers, who also struggle to secure funding and staffing.

Together, national NGOs, refugee-led initiatives, and national researchers form the basis of vibrant, localized “ecosystems” with the ability to generate new knowledge, identify new solutions that are viable and accepted by all stakeholders, mobilize support for innovative responses, and support the implementation and evaluation of new responses. Such ecosystems require sustainable support, the autonomy and authority to identify opportunities for innovation in local contexts, and stable support that enables them to pilot new initiatives, tolerate risks, and take successful innovation to scale.