In the spirit of collaboration which is so central to LERRN, we’re writing this post together. We do this not only to highlight our research in Tanzania but also to discuss why local-international research partnerships are the bedrock of this undertaking. In what follows, we alternate between separate and combined reflections on the first four weeks of our partnership in studying the national legal framework for refugees in Tanzania.

Since I’ve previously been introduced in a post, I’ll jump right into introducing my research partner: Leonard Chimanda.

Leonard is a Tanzanian Master’s student in Law at the University of Dar es Salaam and his interest in refugee issues began long before he joined the LERRN project. During his advanced secondary studies, he was part of the voluntary team that went to Ulyankulu Settlement in Tabora (central Tanzania) to teach Burundian refugees as they prepared for secondary school. He also participated in national and international moot court competitions for International Humanitarian Law in 2017 in Tanzania. During these sessions, he was deeply interested in the forced migration caused by armed conflict and later, during his undergraduate studies in law, he continued to study this subject by taking a voluntary course in refugee law.

All of these things led Leonard to where he is today: finishing his Masters of Laws with a focus on Migration and Refugee Law and conducting research with LERRN. We were introduced by email mid-summer 2019 and I was immediately impressed by Leonard’s obvious expertise and deep commitment to refugee protection. He can rattle off laws in a way only a truly passionate scholar can. As someone who had never been to Tanzania before, four weeks of partnership has taught me that I would be entirely incapable of conducting this research in a month without him.

Stéfanie and I were introduced by email in June and we set out to write our work plan and exchange information about refugee law. We met for the first time in person on July 23rd when she arrived in Dar es Salaam. From my perspective, the LERRN project is a special opportunity for me to practice, through research, what I learned in class. The story of Tanzania’s refugee laws is a familiar narrative to me. Being a party to the UN Convention and Protocol Relating to the Status of a Refugee of 1951 and 1967, and to the OAU Refugee Convention of 1969, Tanzania enacted the Refugee (Control) Act, 1966 as her first refugee legislation. This Act was repealed by the Refugees Act of 1998, soon followed by the National Refugee Policy of 2003. During the Nyerere years between independence and 1989, and in the spirit of pan-africanism and Ujamaa, Tanzania’s refugee policies and practices were generally considered open and welcoming. Due to these practices, the country received the Nansen Award 1983 as a recognition for its hospitality in hosting refugees. However, from 1990 to date, the country’s refugee policy and practice has changed and has become more restrictive. The current government has increasingly turned to restrictive measures for “managing” asylum seekers and refugees.

Based on the government’s current tone, reflected in the National Refugee Policy of 2003, refugees pose a threat to security, the environment, morality and development. Tanzania’s withdrawal from the Comprehensive Refugee Response Framework (CRRF), in February 2018 only several months after signing on as a pilot country, demonstrates the shifting nature of refugee policy here. Currently hosting approximately 325,796, the majority of whom are from Burundi (74%) and the Democratic Republic of the Congo (25.8%), what the Tanzania government chooses to do has far reaching implications.

With this history in mind, we are attempting to trace how national law, policy and practice might be conditioning the implementation of global refugee policy. What factors create barriers and gaps in protection? And what can reasonably be done to create more favourable conditions for implementation and collaboration in Tanzania? We’ve begun by studying and summarizing the national laws and policy; interviewing local organizations (Dignity Kwanza, Tanganyika Christian Refugee Services), large INGOs (Oxfam, UNHCR, Danish Refugee Council) and academics (Professor Koti Kamanga); and by attending partnership meetings (TAREMINET) and one SADC conference event on Statelessness.

One thing has stood out in particular: the government of Tanzania is intent on making its own decisions, not necessarily those that suit the international community. In all of our meetings, partners have suggested that what is truly necessary at this time is to support local initiatives, to build capacity on the ground, and to localize research so that it will be Tanzania grown and Tanzania owned. Therefore, LERRN’s work is extremely timely and we are gathering what we hope is evidence that localized research is a vital tool for supporting advocacy efforts and increasing refugee protection.

I chose to become a researcher for LERRN because I believe in its mission to co-create knowledge and centre the voices of local civil society actors in the conversation on international refugee policy. In my eyes, this research would be impossible without the direct local knowledge and expertise Leonard brings to our team and without the team of local organizations supporting our research.

We look forward to many more years of partnership and improved collaborations between international and local actors with the hope that the spirit of the international, regional and national refugee protection and human rights laws will be increasingly respected and implemented. 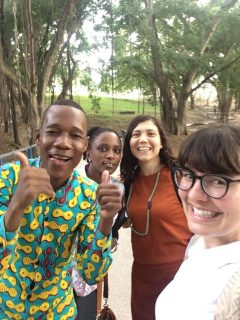