Reflections on Canada and the Global Refugee Regime: Opportunities for Partnered Research

On 3 October 2019, the Local Engagement Refugee Research Network (LERRN) organized a panel discussion with partners from research, policy and practice to discuss how partnered research could engage with Canada’s role in the global refugee regime. The panel was part of the two-day conference “Informing Migration Policy Through International Experience and Evidence”, organized by Carleton University’s Migration Policy Research Group (MPRG). The panel was chaired by James Milner, LERRN Project Director, and featured the perspectives of Jessie Thomson from CARE Canada, Chris Gregory from IRCC, Christina Clark-Kazak from University of Ottawa, and Nathan Benson from the Refugee Hub. 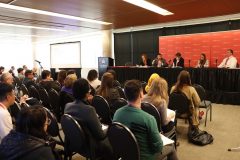 The October 9th panel discussion with partners from research, policy and practice.

The panel examined the role of academic research on Canada’s engagement with the global refugee regime and its contribution to policy and practice at the global level and in the global South. Historically, Canadians have been leaders in refugee research, such as through the Refugee Research Network (RRN) IRCC’s own research efforts, SSHRC-funded research on Syrian refugees in Canada, and engagement by the Refugee Hub and others with the global compacts on refugees and migration. Building on these experiences, panelists agreed that academic research is valuable for informing policy and practice, and that there is a moral obligation to contribute to policy in the context of forced migration

But there are also barriers to bringing academic research into policy discussions. First, the panel highlighted the importance of knowledge translation, suggesting that academic research has the potential to shape policy and practice, but only when it is presented in a usable form for policymakers and practitioners. The traditional academic article is not very accessible given academic jargon and length, so researchers need to invest in knowledge translation and consider alternative formats such as policy briefs. However, knowledge translation is a distinct skillset and academics are not typically trained in this area. In addition, policy engagement is not rewarded within academia the same way as traditional academic work. While researchers in the Global South hold important knowledge, it does not often travel into international conversations, something that LERRN is trying to address. The slow pace of academic research is also a challenge given rapidly changing policy environments, which makes it difficult to influence policy in real-time.

In doing research, academics need to recognize the constraints of both NGO partners and the government. For NGOs, operational realities – including limited funding, staff turnover and workload – make it difficult to commit time to a long-term partnership and to build the necessary foundation of trust. It was suggested that coordination between researchers could help lessen the burden on NGOs and avoid duplication. For example, it is onerous for a settlement agency to speak to twenty researchers separately, but speaking to one researcher or a group of researchers is feasible. For the government, operational realities also impact policy and practice, so researchers should be cautious about making assumptions without a good understanding of the context.

Finally, the panel suggested some approaches and ideas for future research. New projects and partnerships should aim to institutionalize refugee participation in all aspects of the research, or in the words of the Network for Refugee Voices “nothing about us without us.” Comparative approaches, case studies, and cohort-based studies all offer useful insights about the impacts of different policies. Research within Canada has concentrated on resettled refugees, so the panel suggested expanding research on asylum seekers in Canada. Future projects could also break down the siloes between research focused within Canada and research focused overseas, such as by examining the impact of pre-arrival experiences on in-Canada integration.