Lessons from the Dadaab Camps in Building Capacity in Education

The International Day of Education on January 24th was proclaimed by the UN General Assembly on December 6, 2018 as a day of action to highlight the role of education in sustainable development and peace, and to “ensure inclusive and equitable quality education at all levels.”[i] In this blog post for LERRN, I reflect on what I believe is the barrier to the realization of this goal in the Horn of Africa: the lack of sustainable solutions to build and maintain local capacity in education. 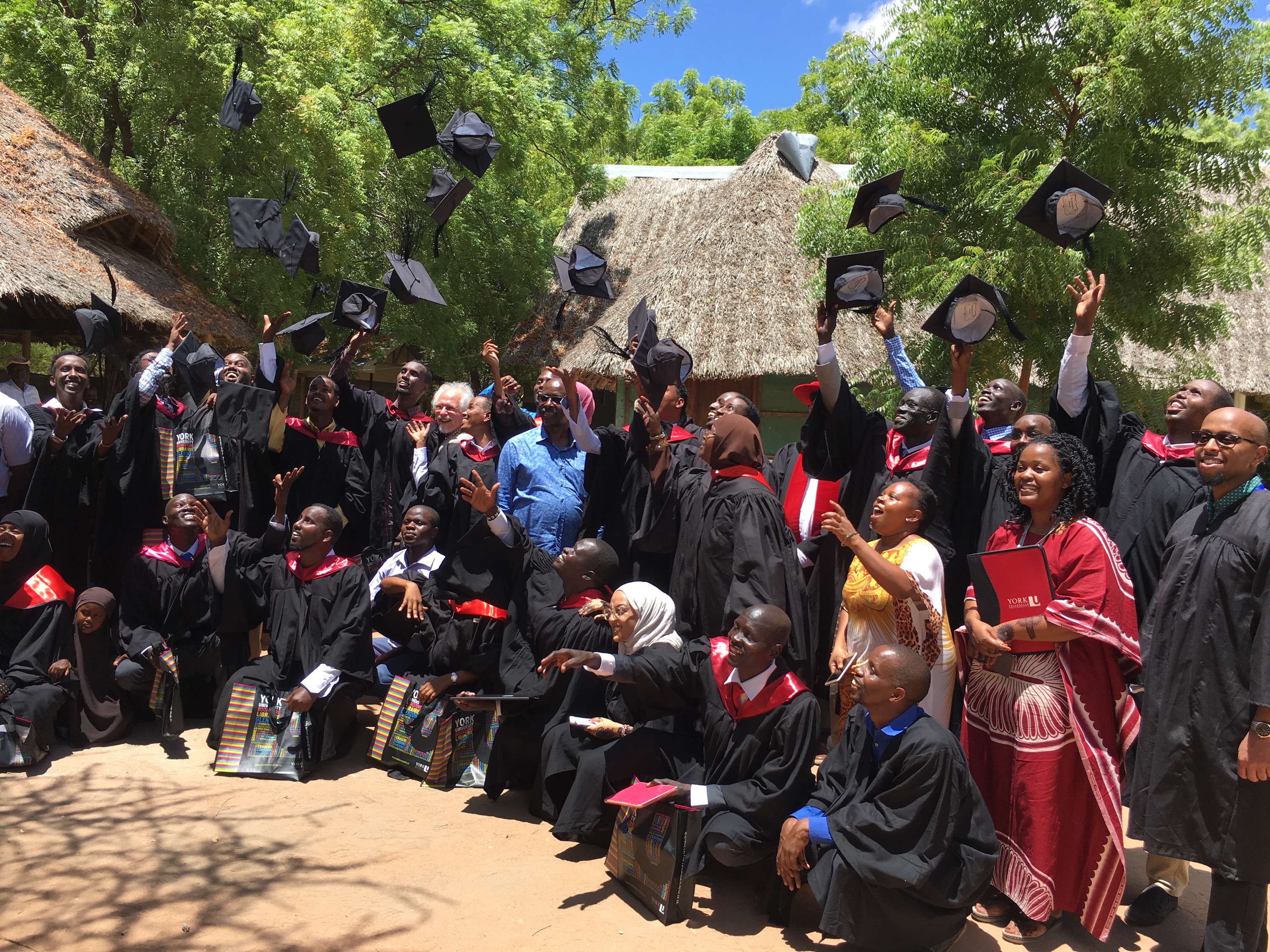 The BHER graduating class of 2019 after receiving their BA in Educational Studies from York University Credit: Mohamed Duale

I have worked as a teaching assistant and course director for the Borderless Higher Education for Refugees (BHER) Project, a trailblazing initiative led by York University, which provides access to university education for refugees in the Dadaab refugee camps in northeastern Kenya.

Through my teaching and research in Dadaab over the years, I have noticed that the humanitarian logic of displacement as temporary impedes long-term thinking about sustainability.

This in turn undermines the building and maintenance of local capacity both in the refugee-hosting and refugee-producing areas of the Horn of Africa. I can draw four lessons about this challenge to the long-term future of education systems in Dadaab, Kenya, and nearby Somalia.

Refugee camps tend to be located in economically and politically marginalized parts of a country, and often the needs of refugees and host communities are indistinguishable. Students in primary and secondary schools in Dadaab town and the surrounding camps regularly underperform the rest of their peers in Kenya as a result of overcrowded classrooms, poor quality of instruction and a lack of curricular resources. Though the situation has improved since the camps opened in the early 1990s, funding for education in Dadaab has sharply declined in recent years due to the looming closure of the camps and the reduction in the refugee population. Schools in Kambios and Ifo 2, refugee camps that have been closed and handed over to the Kenyan government, are currently in disuse owing to a lack of financial and human resources, a fate that awaits other camps in the years to come. This jeopardizes important gains that have been made in school participation and completion rates, particularly of girls and young women. Funders and NGOs need to work with the county government to find ways to sustainably fund access to education after the camps close. Rather than dismantle or allow the schools in closed camps to deteriorate, it would be better to turn Dadaab into a hub of excellence in education in Kenya’s northeast region.

Refugee teachers, which constitute the majority of the teaching force in the camps, are deprofessionalized by a national refugee policy that limits their compensation to an ‘incentive wage’ (a fraction of the typical salary). Certified teachers from southern Kenya often stay in Dadaab for a short period of time owing to the difficulties of living and working in a refugee camp. Providing teacher training at the tertiary level, certification and pay equity to refugee teachers will help to retain crucial human resources to support improved educational outcomes in the camps and the wider Horn of Africa. Last year, I co-wrote an article that talks at greater length about refugee teachers, which you may find here: https://www.fmreview.org/education-displacement/duale-leomoi-aden-oyat-dagane-abikar.

Access to education is one of the key pull factors for displaced people to come to refugee camps as schools are often destroyed during armed conflict. I have heard repeatedly that the lack of schools in Somalia continued to be one of the main barriers to repatriation among those who considered return. As the Dadaab camps gradually close over the next several years, funders and NGOs should support the Somali federal and state governments as well as credible civil society actors to rebuild Somalia’s education system. This will require funding to build and resource schools and train teachers among a variety of other structural supports.

For much of the 1990s and 2000s, there was no access to post-secondary education other than a few international scholarships which took a small number of the youngest and highest performing students for study abroad. The emergence of camp-based university education programs such as BHER has changed the landscape of education in Kenyan refugee camps. A larger number of people can now access tertiary education without needing to leave the camps. Nevertheless, programs like BHER have struggled to maintain sustainable year-on-year funding despite its significant impact on education in the camps and the broader region. Many of the graduates from BHER have returned to Somalia to open schools or to work for NGOs. Others have gone onto study for a Master’s degree with York’s Faculty of Education and are emerging scholars and leaders in their own right.

Similarly, the international community needs to invest in the reconstruction of public universities in refugee producing countries to build capacity for overall national reconstruction. Many of these universities are reopening with limited resources and little outside support. In 2014, the Somali National University, the first and only public university in Somalia, was reopened after it closed in 1991. The university trained and graduated the first cadre of qualified teachers in three decades in 2018. As many of the university professors were killed or exiled during the conflict, there is a critical shortage of qualified university instructors, and a need to partner with global universities to gradually replenish exhausted academic capital.

These four lessons highlight the imperative of thinking beyond the humanitarian paradigm towards a developmental and regional approach that is responsive to the need to build and maintain local capacity for education in the Horn of Africa. This will require partnership, funding and localization of programs by international NGOs. In particular, it will also necessitate that funders and large international NGOs work closely with the county government in northeastern Kenya and the Somali federal and state governments, as well as civil society, to support national and local education strategies. Although the points made in this blog post draw from realities in the Dadaab camps and Somalia, the situation is much the same with other refugee camps such as Kakuma and conflict affected countries such as South Sudan.

Mohamed Duale is a PhD candidate in Education at the Faculty of Education at York University. He is a course director with the BHER Project and a researcher with LERRN.