Home / News / LERRN-IDRC Webinar: Refugee-Host community relations during Covid-19 and beyond: Lessons from the Middle East and Southern Africa

LERRN-IDRC Webinar: Refugee-Host community relations during Covid-19 and beyond: Lessons from the Middle East and Southern Africa 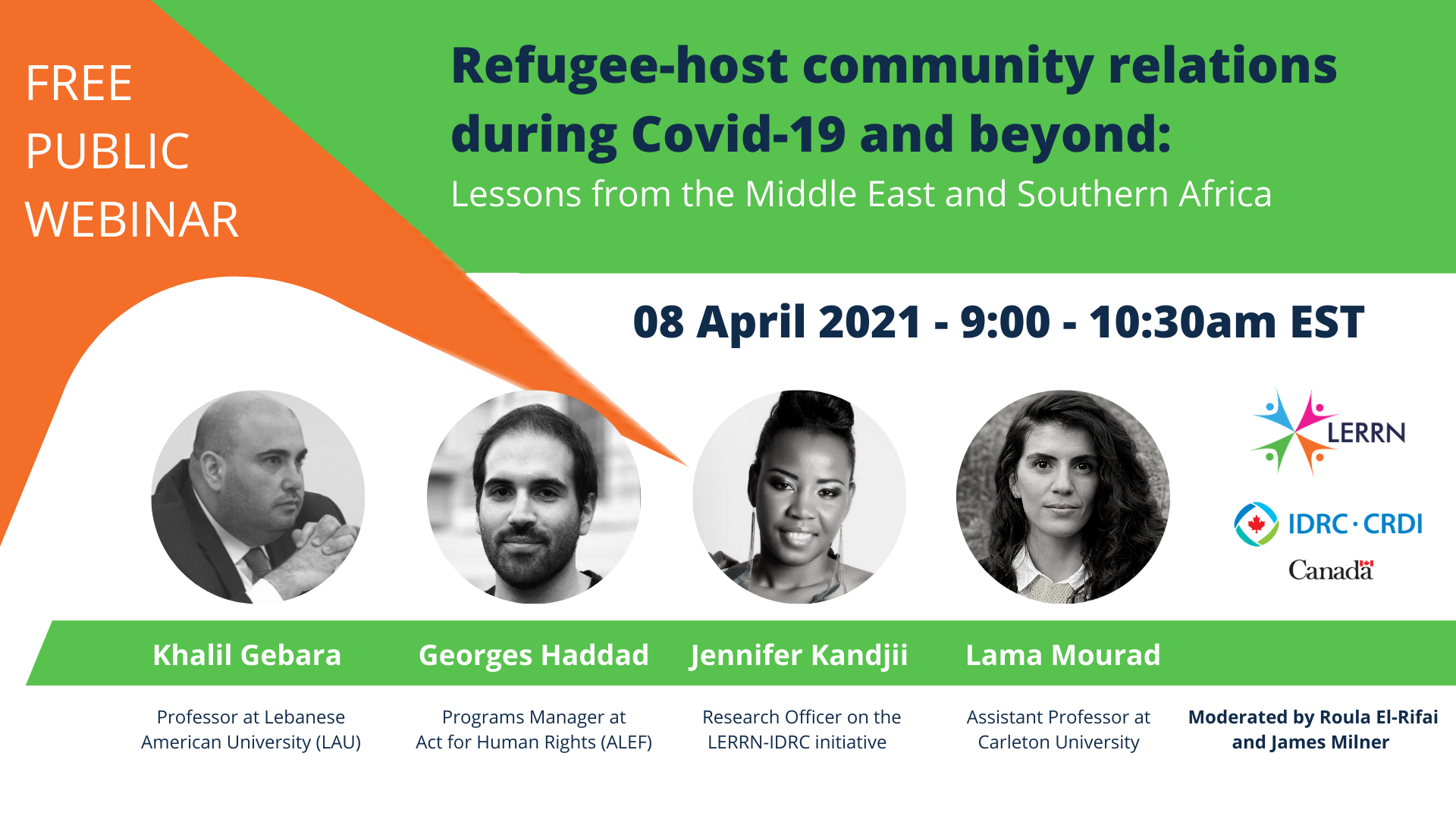 On 8 April 2021, the Local Engagement Refugee Research Network (LERRN) and the International Development Research Centre (IDRC) hosted the fifth of their webinar series on forced displacement. Drawing on lessons from the Middle East and Southern Africa, co-moderators Roula El-Rifai and James Milner, along with panelists Khalil Gebara, Georges Haddad, Jennifer Kandjii, and Lama Mourad, came together to examine the range of factors that shape relations between refugees and host communities, and to consider solutions to foster social cohesion and mitigate social tensions.

The challenge of refugee-host relations arises at a particular moment in the history of the global refugee regime. The world is witnessing the highest levels of displacement on record. At the same time, countries in the Global South bear the brunt of it, hosting the vast majority (86%) of the world’s refugees in their communities. It is in countries like Lebanon and South Africa, where the intensity and scale of displacement is the greatest, where the consequences are felt the deepest, and the stakes are the highest. Yet the scale of displacement, rising expenditures, and a limited appetite for burden sharing among states constrain the ability of the United Nations High Commissioner for Refugees (UNHCR) to secure durable solutions and protection for refugees, resulting in calls for more innovative approaches and collective engagement.

During the discussion, the panelists emphasized how understanding context is critical to designing appropriate responses to forced displacement. Lama Mourad, Assistant Professor at the Norman Patterson School of International Affairs, provided a typology of four inter-related factors that influence refugee-host relations: historical, political, economic, and symbolic. She cautioned, however, against broad generalizations, suggesting that individuals within a country, region, community, and household may experience the same situation differently. Lebanon is a case in point. Mourad highlighted how the ‘refugee-host’ binary does not always hold up in Lebanon. The country has a sizeable population of long-settled Palestinian refugees who, since the Syrian crisis, now find themselves as hosts. Likewise, the kinship and social ties that connect Lebanon to Syria are deep, and are coloured by complex histories of trade, labour migration, war, and occupation.

Khalil Gebara, Professor at the Lebanese American University, provided insight into the role political and economic factors play in refugee-host relations. He argued that in Lebanon the response to the Syrian crisis is generally not driven by policy. Whereas Palestinian issues are guided by a special directorate within the government, nothing similar has been created for Syrians. This is particularly problematic because of the nature of the political system, which is marked by deep sectarian-religious divisions and a lack of political accountability. Together, the political situation puts refugees on unstable ground, as key issues like border policies, security, health care, and aid are at constant risk of contestation and change.

But perhaps the most important influence on refugee-host relations is economic. In many jurisdictions the economic impact of migration is a key concern of publics, policymakers, and politicians alike. These concerns are often magnified in the Global South, where economies are regularly defined by fragility, informality, and limited opportunities. Gebara indicated that the current economic crisis in Lebanon will likely have a dramatic effect on the country’s response to the Syrian displacement in the coming years. Banking and currency crises, rising inflation, and increased unemployment are creating a cash crunch for the government and pushing more Lebanese people into the informal labour market. So, not only does the government have less resources to ensure the proper functioning of domestic institutions and services, but Lebanese people find themselves competing with Syrian refugees for work in the informal economy.

Jennifer Kandjii, Research Officer at the LERRN-IDRC Initiative, discussed how these material realities can inform public narratives, that in turn shape the perspectives and experiences of refugees and hosts communities. Around the world, negative discourses that portray refugees as criminals, parasites, job stealers, or queue jumpers serve to undermine refugee rights to presence, protection, dignity, and well-being. Kandjii highlighted that in South Africa, a country with relatively liberal refugee policies, negative discourses – fueled by the public, media, and politicians alike – have contributed to outbreaks of xenophobic violence towards refugees and other migrants.

With these challenges in mind, the panelists also focused their attention on solutions to mitigate tension and foster cohesion between refugee and host communities. While in the last few years the UNHCR and the wider humanitarian community have experimented with ‘whole-of-society’ and ‘area-based approaches’ to respond to the needs of refugees and hosts affected by displacement, Georges Haddad, Programs Manager at Act for Human Rights (ALEF), argued that in Lebanon this results in an “illusion of coordination.” After a decade of intervention, involving hundreds of INGOs, dozens of major donors, numerous working groups, conferences, and other initiatives, poverty among refugees continues to increase and there are still gaps in service delivery. Haddad suggested that a change in approach is required, one that identifies allies and opportunities and scales-up on small successes. Key to this approach is the localization of aid.

Local civil society organizations have roots in the community, capacity, and experience. Despite the lofty rhetoric of donors and international organizations, “local organizations are put on the bench”, and only 5-6% of humanitarian funding in Lebanon goes to local NGOs.

In a similar vein, Gebara and Mourad highlighted the importance of complementarity – interventions that benefit both refugee and host communities. Social cohesion and community well-being relies heavily on healthy domestic institutions and systems to provide public goods and services, and as such they serve as ideal targets for humanitarian funding. Gebara stressed that given the critical situation in Lebanon, humanitarian interventions must support the health care, education, and even banking sectors to prevent total collapse and preserve social order. Mourad emphasized the importance of municipalities. Municipal governments are actors whose policies and actions bear heavily on the lives of refugees and hosts, and who – at least in Lebanon – have begun to play a larger role in aid provision. The challenge here, however, is how to utilize domestic institutions and systems with a history of intolerance towards refugees. To Mourad, there is no simple answer:

“We need to think about how to build an incentive structure that doesn’t privilege those that ratchet up the politics of exclusion.”

Furthermore, panelists suggested that humanitarian interventions must take representation and language seriously. “Language and other categories of otherness emerge and are instrumentalized to achieve four objectives: to identify and name, to discriminate and exclude, to scapegoat and blame, and ultimately to expel or push out” Kandjii stated.  “Violence starts with words” she argued, “if not addressed, it grows.” Kandjii warned that when there is a swell in antagonistic language towards refugees, it must be addressed before it escalates. Here, she sees a role for the UNHCR to encourage positive public narratives about refugees. These narratives can be built in part through education and promotional campaigns, but ideally, they should capitalize upon “moments of spontaneous alliances” to build upon and amplify solidarity between refugees and hosts.

At the end of the discussion, the panellists underscored that achieving social cohesion among refugee and host communities is not straightforward but requires collective effort to mitigate tension and build mutual understanding. It seemed equally clear, however, that achieving this stability will require substantial changes to the typical humanitarian approach. The panelists’ calls for more localization, collaboration, and partnership echo what Caroline Kihato and Loren Landau (2017) refer to as “stealth humanitarianism”: approaches to aid delivery that require enhanced local literacy and increased engagement with municipal authorities, local actors, and public institutions. This move towards more development-oriented interventions will present challenges to donors and humanitarian actors, but may pay dividends to the individuals, communities, and governments experiencing forced displacement.

Click here to watch a full recording of this webinar.