Ally Smith on Social Enterprise in Canada and Scotland

Ally Smith is an MPNL graduate, a social entrepreneur, and a Research Associate at The Young Foundation, which develops better connected and more sustainable communities across the UK. She previously worked at Operation Come Home (OCH), an organization supporting homeless youth in Ottawa. PANL Perspectives spoke to Smith about elevating community needs to drive change and how that led to the social enterprise she’s building in Edinburgh, Scotland. The interview, edited for length and clarity, is by Sherlyn Assam.

The Young Foundation has a culture of “doing with people” rather than “doing to people.” How does this influence the organization and service you provide?

Smith: That’s what drew me to working with them. I’m a big supporter of “working with” not “working to.” I wrote a report for the Young Foundation called The People-Centered Approach, because the Foundation is a leader of this approach in the sector, but no one really had the time to write down how they did the work. Their people-centered approach is something they apply to their researchers’ work, their community work, and their social investments; that means listening to communities and allowing them to be drivers of change. The Young Foundation creates space and provides resources for communities to create their own change.

How did you get started in the social enterprise sphere, and how do you see social finance moving within the sector? 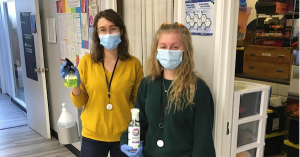 Ally Smith and a colleague at Operation Come Home.

Smith: I’m excited about social enterprise, and I feel like it’s an untapped area of the nonprofit sector. In Scotland, the social enterprise sector is quite robust, and there’s a lot of government support for it. I randomly fell into this opportunity. There’s a tech, co-working space in Edinburgh, and I’d heard that their pop-up coffee shop closing during the pandemic. “I could do that,” I told myself. The only reason I want to run a café, a business, is to create social impact, because that’s the thing that gets me up in the morning. I want to tie the café to youth work. In the past, with OCH’s employability programs and social enterprises, I helped youth to write resumes, prepare for interviews, and get their first jobs. I feel like there aren’t enough opportunities for folks who just don’t fit the mold of the first-job requirements, and they need a little extra support. The plan with the café is to partner with an employability program in Scotland to become an employer of youth who face barriers to employment, and to offer barista and customer-service training, so that they have an opportunity for paid employment.

Why do you think Scotland embraces social enterprise and provides a lot of government support, compared to Canada?

Smith: The UK in general has a strong, social-welfare state. There’s strong community presence, community groups, and unions. Scottish people have a strong sense of taking care of one another, so there’s a lot more of an appetite for social enterprise. The government has been funding social enterprises here for around 20 years. 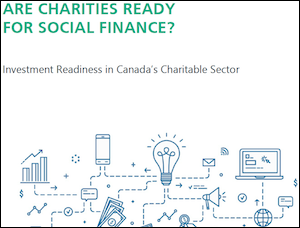 Read Imagine Canada’s 2020 report, “Are Charities Ready for Social Finance?,” which discusses how many charities aren’t interested in taking on social finance loans, and how their awareness of this revenue source is relatively low, particularly among small- and medium-sized organizations.

What barriers or sources of hesitation do you think Canadian nonprofits face when thinking of starting social enterprises?

Smith: The traditional ways that charities think of themselves are barriers. Charities are used to receiving government funding, so they maintain the status quo. It takes money to be able to think outside of your current circumstances, but a lot of charities are in survival mode. Also, the lack of professionalization of the sector — I mean, that’s why the MPNL program exists. It’s important to have people in the sector who understand the concept of social enterprises; you don’t know what you don’t know, so that’s probably part of it as well.

Also, I remember fighting to tell people outside of OCH why the organization was doing social enterprise. The charity had an uphill battle for a long time, and led the way in social enterprise in Ottawa. The onus shouldn’t be on nonprofits to convince funders that nonprofits and communities are doing the best things; funders should trust that the sector knows what the sector needs. And funders aren’t always expert in what’s going to best serve a specific community. The community is the expert. And who’s closest to the community? The nonprofits that work with them. That funding narrative about social enterprise needs to be flipped.