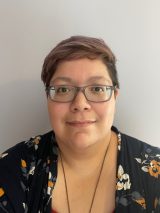 Hello, my name is Theresa Benedict and my Mohawk name is Kaheratonkwas “she is picking the cornstalks” and pronouns are she/her. I am a member of the Mohawks of Akwesasne, a member of the Snipe clan, and live and work in the Akwesasne Mohawk territory. I graduated from Trent University in 2018 with a B.A in Indigenous Studies and started working for the Mohawk Council of Akwesasne in the Aboriginal Rights and Research Office. My work as a researcher focuses on historical research for land claims and community projects, collaborating with other First Nations on projects, and consulting with federal government groups on conservation of land and historical sites.

I am taking the MA specialization in Canadian Studies and Digital Humanities and was drawn to both programs because of my interests in Canadian and Indigenous history and using digital media and technology as tool for preservation, education, and research. My goals for learning from these programs are to take digital media, such as video games and make Indigenous culture and history fun and educational, while preserving our culture the way we want to for our future generations.

On my free time I enjoy reading fantasy novels, making beadwork for family and friends, and playing video games with my partner. 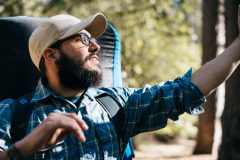 My name is Christopher DesRivières and I graduated from La Cité Collégiale in 2008 with a degree in Architectural Technology and I began working in the construction industry. After spending over a decade working full-time in construction, I returned to school part-time in 2014, graduating from Carleton University with a Major in Canadian Studies and a Minor in Anthropology. My return to school allowed me to further challenge my understanding of built spaces through a decolonizing lens, and reflect on my own identity as a white, male settler navigating unceded and unsurrendered lands.

I had the privilege to take two graduate-level courses last year though Carleton’s Accelerated Program, which has only reinforced my decision to pursue an MA in Canadian Studies, with a specialization in Heritage and Conservation. I intend to use my professional experiences in construction and architectural technology to guide my MA research, which will examine the ways in which heritage buildings and sites built on unceded and unsurrendered Algonquin territory are used to portray narratives that reinforce settler histories. My main objective is to contribute to the growing body of knowledge on the decolonization of heritage sites in the hope to better facilitate the Indigenization of heritage and conservation practices. 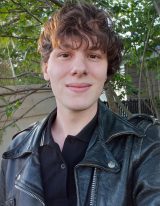 I am a M.A. student in Indigenous and Canadian Studies at Carleton University. I am from Ottawa, Ontario on unceded Algonquin Anishinaabe territory, and my pronouns are they/them. My ancestors settled here from France, Scotland, and Ireland. In Winter 2020, I completed my B.A. in Philosophy and Indigenous Studies with a minor in Sexuality Studies, and see my current work as continuing research done during that degree. Some of my research interests include feminism, existentialism, anti-colonial politics, and emancipatory movements.

My research is concerned with understanding Indigenous self-determination, feminist struggle and class struggle in relation to each other. For my thesis, I am writing on Indigenous-settler solidarity praxes and radical relationality/kinship. The project involves a case study, interviews, and thinking critical Western traditions in relation with Indigenous knowledge. This has led me to re-read Fanon’s work, the Fanon-influenced vein of Indigenous decolonization theory from Turtle Island, and Indigenous feminist theory alongside movement texts. As a case study, I investigate the Indigenous-setter solidarity movement that emerged around the blockades in solidarity with the Wet’suwet’en during the winter of 2020. 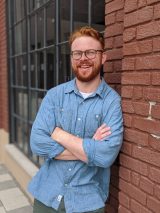 I am a first-year M.A student in the SICS Heritage Conservation stream. In 2020 I completed my Bachelor of Environmental Studies (B.E.S) in Urban Planning at the University of Waterloo, where I had the opportunity to complete several work placements in municipal and private sector planning throughout Ontario.

My research interests include the salvage and reuse of building materials, including those originating from demolished modern and post-modern buildings. In particular, I am interested in how salvage and reuse can be implemented within existing development planning and heritage conservation policy frameworks at the municipal and provincial level. I am also interested in the decolonization of planning systems and how heritage planning can more equally and effectively conserve and support the diverse histories which make up Canadian communities.

In my spare time I love watching sports of all kinds, reading, playing board games, and hiking.

Christine Mao is a Canadian-born Chinese from Toronto, Ontario, currently living as a guest on unceded and unsurrendered Algonquin territory. She has been a member of ACTRA since 2013. You may recognize Christine from her appearances in TV and film productions on CBC (The Best Laid Plans, Michael: Every Day, and Season 3 of Kim’s Convenience), NBC (Taken, Season 2), the W Network (A Husband’s Confession), and YTV (Zoink’d); or you may remember her singing and comedic performances in Unhappily Ever After on stage at Centrepointe Studio Theatre and Absolute Comedy in Ottawa, Ontario. Either way, Christine is known for being a real character – someone who makes a lasting impression on those she meets.

Christine’s academic background includes being Called to the Degree of Barrister-at-Law with The Law Society of Upper Canada in 2000, graduating with a Bachelor of Laws from the University of Windsor in 1998, and an Honours Bachelor of Arts, majoring in psychology, and minoring in sociology from Wilfrid Laurier University in 1995. She is currently working towards her Master of Arts in Canadian Studies, on a part-time basis, with the School of Indigenous and Canadian Studies at Carleton University.

Since 2010, Christine has built and earned a reputation for being passionate about diversity, equity and inclusion. She has earned multiple awards for her work. As well, in 2015, she participated in the ACTRA National Diversity Committee’s Short Film Competition 2.0, and she was 1 of the 3 winners selected from across Canada. The challenge was for ACTRA members to submit a script answering the question, “How are diverse Canadian stories important for our screens and our society?” Her answer, entitled Drum With Us, is available on YouTube.

In addition to her day job (as a federal public service leader – Senior Advisor to Chief Equity and Inclusion Officer at Innovation, Science and Economic Development Canada), Christine is also a spouse, a mom, a mentor, and she is also 1 of 3 Co-Guiders with the 42nd Barrhaven Pathfinders/Rangers Unit.

Christine is keen to learn more about accessibility, diversity, equity and inclusion so that together, we can build and support a more diverse, equitable and inclusive community for us all. 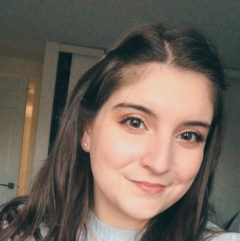 I am a first year M.A. student in the Canadian Studies program, and my pronouns are she/her. I am a settler Canadian with family from Malta and the U.K. I graduated from Trent University in 2020 with a B.A. International Development Studies and a minor in Indigenous Studies.

My academic research interests revolve around settler colonialism within urban activist spaces. For me, this stems from an interest and investment in the spaces where Settler-led and Indigenous-led activism interact, and the relationships between Indigenous and non-Indigenous peoples in this particular area of society. Topics of concern include grassroots activism in Canada, settler moves to innocence and comfort, power dynamics within grassroots activism, and the role of non-Indigenous organizations in activism.

A personal goal of mine is to continue exploring how I connect and engage with the settler Canadian identity and what my responsibilities are as a settler.

In my free time, I also trying to spend more time connecting with Maltese culture and traditions, and hope to travel back for my second visit as soon as it is safe. 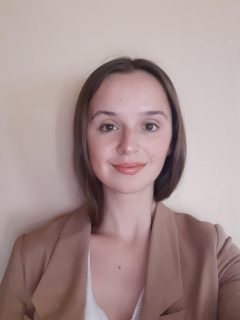 Anhelina is a first-year master’s student at the School of Indigenous and Canadian Studies. In 2022, she earned the degree of Honours Bachelor of Social Sciences in Anthropology and Minor in Psychology from the University of Ottawa. She is a proud Ukrainian Canadian, born and raised just outside of Ottawa—on the unceded and unsurrendered territory of the Anishinabe Algonquin Nation.

Anhelina’s academic research interests include cultural revitalization in First Nations, Inuit, and Métis communities; the decolonization of Turtle Island; and memory studies with a focus on lived experience and intergenerational transmission of trauma. She believes in popularizing and building access to critical knowledge in Canada. She hopes to use new and stronger methods of knowledge distribution—those that can make critical knowledge accessible for all—to share her research findings.

Anhelina is a firm believer that the best way to learn is to never stop asking questions. 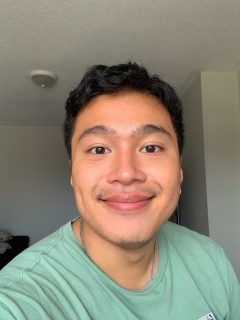 My name is Jan Rosete and I have just recently finished a bachelors with honours in law and politics at the University of Windsor, with a minor in environmental studies in June 2021. I have been very lucky to have been accepted in Carleton’s Canadian Studies master’s program where I will pursue a thesis that will examine the way non-indigenous groups have hindered the progression towards Indigenous self-governance and how to tackle present forms of oppression like the Indian Act in order for Indigenous made recommendations within the Royal Commission on Aboriginal Peoples to be respected and upheld.

My interest in this program came from taking classes centered around Indigenous issues within Canada, and after learning about forms of Indigenous governance and how they have been severely violated throughout history (and even to this day), I began to delve deeper to read personal accounts written by Indigenous authors. Through books such as Braiding Sweetgrass by Robert Kimmerer, A mind Spread Out on the Ground by Alicia Elliott, and countless others, I have developed a deep interest in studying Indigenous governance and ways how non-Indigenous peoples, like myself, can aid in their journey.

As an immigrant to Canada, I will always be thankful for the sacrifice my parents had to go through in order to give me and my sisters a prosperous life in a country 13 hours away from home. With my research, I hope to gain the wisdom and the knowledge towards the overall cost of these opportunities given to not only myself and my sisters, but to the vast immigrant population of Canada.

My future goal is to become a professor where I can teach students, immigrants and non-immigrants alike, the ways non-Indigenous peoples can still be an ally towards the cause of Indigenous governance and how Indigenous lives were sacrificed in order to give us the opportunity to simply learn in a classroom today. I would love to examine not only past instances of Indigenous assimilation, but also how these oppressive structures exist today through legislation such as the Indian Act and how moving forward we can hopefully break these European centered legislations to create a form of self-governance made by and for Indigenous peoples.

I believe, in the very least, it’s important to not only be grateful but to also understand how Canada came to be today and the lives it has infringed upon in order to create the country it is today. 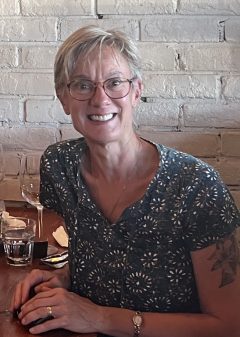 I originate from BC where sunshine was usually liquid, and memories were of sailing with family among the Gulf Islands and up the Sunshine Coast. However, my educational and professional background are business related as I obtained a Business and Liberal Arts Bachelor of General Studies degree from Simon Fraser University and an Honours Certificate of Management in Human Resources from British Columbia’s Institution of Technology. This allowed me to sit my exams for certification as a Certified Human Resources Professional.

I then worked for 25 years as a senior executive in the BC private healthcare industry. During that time, I created Canada’s first communication tool for siblings of children with cancer, built two fertility centres, a private laboratory, and facilitated accreditations through Accreditation Canada and the College of Physicians and Surgeons of British Columbia.

Today though, my interests have shifted, and I am more concerned with the villages of southeastern Ontario. I hope through my M.A. studies, to gain a thorough understanding of the dynamics that politics, Indigenous rights, immigration law, and racism had upon the development of these early settlements.