Each month we are profiling one of our Web Services team members. This month we hear all about Alex! 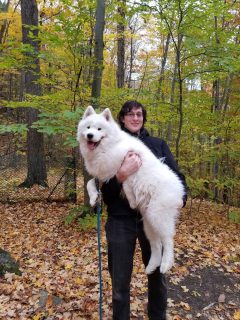 How did you enter this career?

I have been passionate about computers since I was young, playing around with dead computers trying to build my own working one. When home computers started becoming more popular in the early 2000s and online flash games were a big thing, I got into them and learned to make some in high school. I came into Carleton as a system and computer engineering student later moving to computer science. Over this time, I found I wanted to help users more than be a developer, I found this out while working at Carleton’s IT student support desk. After 5 years working as a student staff, I worked my way up to casual staff in 2017 and full time in 2018, from there I have gone to a couple other CDA’s within ITS to see further on what I would like to do, ending up here with the web team for the next year.

Where else have you worked?

When I started working it was at a butcher shop right out of high school. I got my foot into the tech fields when I did an internship with Oxfam Canada with the IT team.  I left those two jobs when I got hired with Morrison Hershfield as a part time IT Co-op and the Carleton IT student desk. from there I became a full-time service desk staff and have done a CDA with the ITS on-site team and now with web services.

What are some of the technologies you have used along the way?

I am familiar with Windows 95 to Windows 10, I also became familiar with active directory, Office 365 and multiple ticketing systems while I was on the service desk. On the web side, I did learn a bit of PHP and Java script in my computer science classes. Having always been a hands-on person and a gamer, I have built custom computers from parts and have learned how to customize them to my preferences as well as diagnose any hardware issues and repair them.

What are the best things about your job?

Working full time on the service desk I have learned the levels of computer knowledge people have in various levels and how to assist them with comprehending it, making it easier for people to understand. Now with the web team I know what level to create trainings and tutorials for the people of Carleton, so everyone will be able to understand it. The teams I have worked here with since I have begun are very knowledgeable and willing to teach and learn from each other to better our society

Do you have some exciting projects you are working on right now?

What music are you listening to at the moment?

When it comes to music, I am not a big listener. I usually just listen in the car to Live 88.5, which here in Ottawa plays alt-rock music mostly. At home I don’t usually listen to much music but overall, some pop music but mostly rock/alt-rock.

Ya What do you do outside of work/school to amuse yourself?

Outside of work I keep myself busy with the house renovations, I moved into a house that had no updates done since being built in 1970. I like fixing things, so I have gone through renovating the floors, bathrooms and next project the kitchen. I also like the outdoors when my allergies are not kicking in, with our Samoyed we go hiking in Gatineau park and Bruce Pit on weekends when weather is nice. On evenings I game on pc with friends.

What exciting plans do you have coming up in the next year?

This upcoming year I am looking forward to my trip abroad to Japan that was postponed due to Covid Lockdowns. We are planning to reschedule it for some time in 2021 if we can else might go to a resort down south.