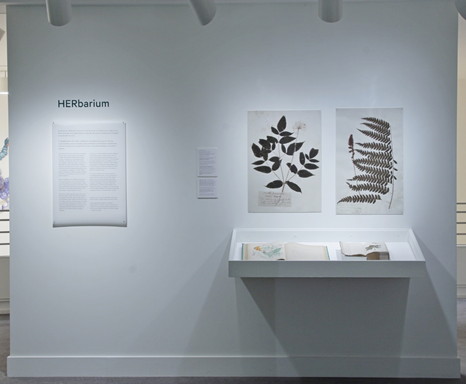 HERbarium is a student-organized exhibition and curatorial project which brings to light the historical contributions of Women naturalists to Canadian Science. The exhibition, displayed in the mezzanine gallery of Carleton University Art Gallery, is the result of the class activities of a Women and Gender studies seminar titled “Representations of Women’s Scientific Contributions”, which was taught by Dr. Cindy Stelmackowich in the Winter term of 2017.  Five female scientists from Canadian history are featured in the exhibition: Catharine Parr Traill, Dr. Irene Mounce, Dr. Mildred K. Nobles, Faith Fyles and Lady Dalhousie.

Although Catherine Parr Traill is more commonly identified as a Victorian travel writer who spoke to the struggles of settling and Britain’s colonizing project in a Pre-Confederacy Canada, HERbarium eloquently represents her contributions as a scientist and botanist in a display of her scientific work. Largescale reproductions of pages from Parr Traill’s album of plant specimens hang on the wall, making visible the scientific labels Parr Traill attached to her specimens of pressed plants. Parr Traill’s botanical albums are housed in the National Herbarium of Canada at the Canadian Museum of Nature.  Albums of this sort by Parr Traill and Lady Dalhousie are displayed in HERbarium. 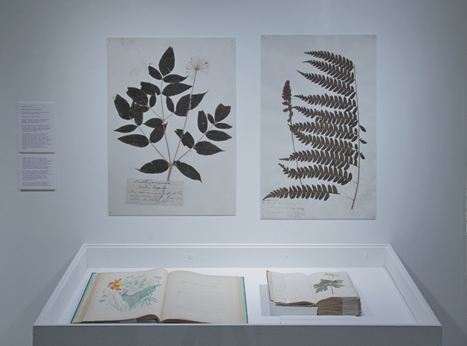 Another portion of the exhibition examines the careers of Ottawa- based scientists Irene Mounce and Mildred Nobles. The curators’ intervention of displaying a regulation passed by the Privy Council Office of the Public Service Commission of Canada 1920 that legally banned women from continuing public service professional careers in the sciences after marriage was particularly powerful in this portion of the exhibition. As many women scientists at the turn of the century worked in the Department of Agriculture, female scientists like Irene Mounce were forced to leave their jobs when they choose to be married. 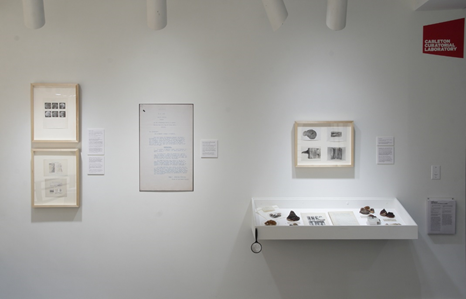 HERbarium is an example of a successful interdisciplinary student-led curatorial project. It is the second exhibition displayed at CUAG that formed out of an Undergraduate Seminar. Students who participated in the seminar and the project were invited to the course from a variety of disciplines including Art History, Women and Gender Studies, and the Sciences. On the first day of the course, Stelmackowich asked her class, “Can anyone name one Canadian woman scientist?”, which was met with silence. Stelmackowich’s response to the lack of public knowledge on Women’s contribution in Science led her to the archive. It was her aim to situate the project’s curatorial methodology towards object-based study, and have students unearth material objects at Canada’s national museums and archives that had been buried under a history of patriarchy. Student conducted object and archival research at Library Archives Canada, Canada Agriculture Museum, and the Herbarium at the Canadian Museum of Nature. Stelmackowich is an established curator and visual artist herself, and she will be curating a show on Women’s contributions to science in the last 100 years at the Canadian Museum of Nature in 2018. This expertise made Stelmackowich an excellent curatorial leader, teacher and role model for the students who produced HERbarium.

Not only did Stelmackowich‘s seminar include field visits to the Herbarium at the Canadian Museum of Nature and other institutions, Stelmackowic also integrated readings from various disciplines and essays on curatorial theory into the seminar. In turn, the exhibition was a result of class discussions and site-visits of prominent collections in the National Capital Region. As a student of Art History who has participated in curatorial projects formed out of Art History seminars, I was excited by the curatorial methodology of HERbarium. The thought of going to National institutions and handling artifacts, selecting objects, and producing an exhibition of this sophistication is impressive and commendable.

CUAG developed the Carleton Curatorial Laboratory (CCL) in 2013, an initiative formed by the gallery to encourage and fund student-run curatorial research projects and foster emerging curators. All CCL projects are displayed in the mezzanine gallery, which is located on the top level of CUAG. HERbarium is the 9th CCL exhibition at CUAG, and the most interdisciplinary project ever placed in the space. The curators of HERbarium worked closely with Heather Anderson, Curator of CUAG and Adjunct Professor at Carleton, to produce the exhibition. According to Anderson, in the past CUAG staff had mentored and guided students in curating exhibitions, but most of those exhibitions focused solely on CUAG’s collection. HERbarium is unique in this regard. For this exhibition, students had the opportunity to choose artifacts outside of CUAG’s art collection. Anderson prepared loan requests of the objects held in the collections at the Herbarium at the Canadian Museum of Nature and Canada Agriculture Museum.

CUAG’s collateral programming for the show was especially well done, which included a tour and talk led by the student curators of HERbarium and Stelmackowich. A magical moment happened at the HERbarium talk. Two patrons at the talk shared that they had known Dr. Mildred Nobles from the time when she taught Biology at Carleton University. Having that personal connection formed in the gallery space made the speakers and audience feel touched on a personal level, which resonates with the significant role these Women scientists now play in our understandings of Canadian history and identity.

HERbarium will be on display at CUAG until December 3, 2017.