You may have heard the phrase “demolition by neglect”. It’s what happens when a building’s maintenance is neglected so egregiously that it falls down on its own, or becomes a public menace that has to be removed. This is what it looks like: 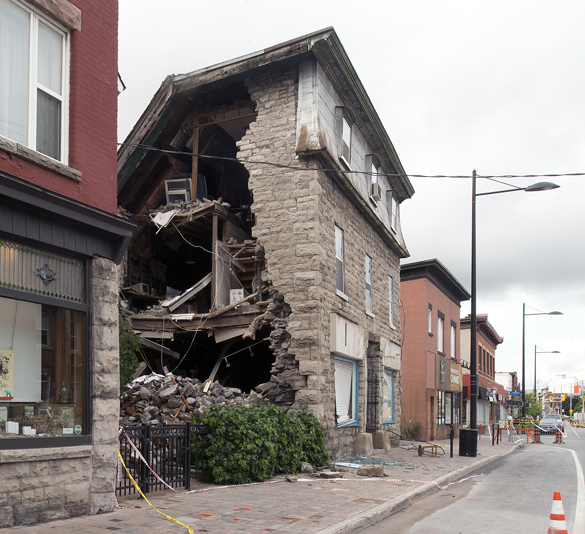 Magee House on July 25, after its west wall collapsed the evening before.

This is Magee House, in Ottawa’s Hintonburg neighbourhood. It is one of the oldest buildings in city, as well one of the very few limestone buildings in Hintonburg. Built around 1874, it served initially as a house to some of the most prominent families in Ottawa, before being enlarged and converted to a bank in 1907 (for a more detailed account of the building’s rich history, see Dave Allston’s 2016 piece in the Kitchissippi Times).

Currently owned and until last week occupied by local architect Ovidio Sbrissa, it has been in a dilapidated and deteriorating state for years. Last Tuesday, the west wall finally gave up the ghost, leaving a gaping hole in the building and a huge pile of rubble and glass. By some miracle, nobody was injured. 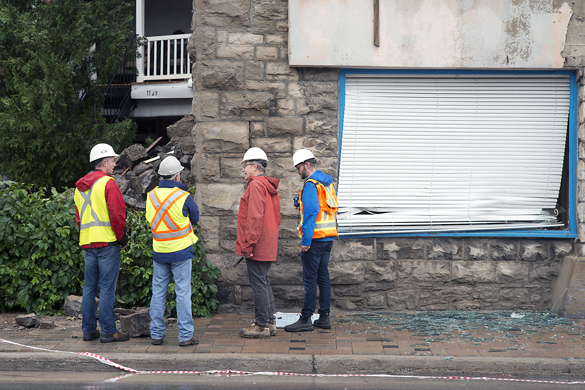 Demolition by neglect can come in two forms: sometimes the owner is looking for a way to demolish a building that is otherwise protected by heritage laws, other times it is simply negligence unaccompanied by malice. I’m sure this is a case of the latter, but the result is the same. One of Hintonburg’s most historic landmarks is now in semi-ruins, and at great risk of being demolished completely. Further demolition has already been undertaken in order to stabilize the remains. 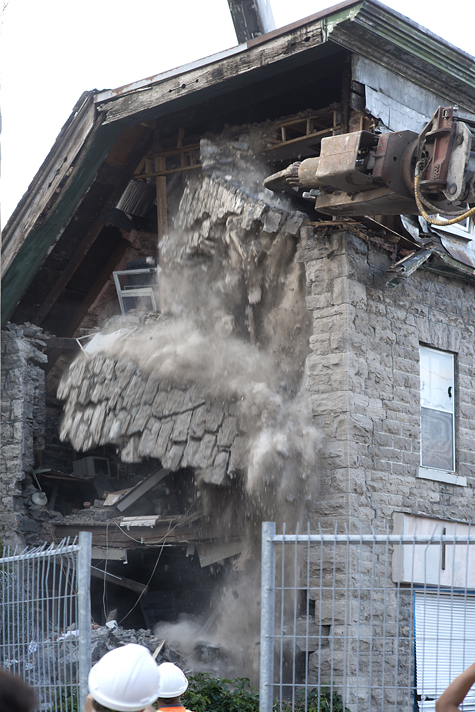 How did it come to this? The onus for maintenance of any property is, of course, on the owner. But we also have safeguards on that, especially in the case of heritage buildings. Magee House was one of twenty-three buildings on the City’s list of Vacant and Boarded-Up Designated Heritage Properties (V&BDHP). These buildings are, apparently, inspected every two months. Magee House was – astonishingly – last inspected in June.

So what went wrong? There are two obvious and unavoidable answers.

First, the owner was utterly negligent in upholding his duty to maintain the property. This is a heritage issue, but it is also a public safety issue. It is just blind luck that no passers-by were injured or worse when the stones poured down and the glass shattered onto the sidewalk.

Second, the inspections carried out by the City under the auspices of the V&BDHP are woefully inadequate. In fact, such is the rigour of these inspections that the City had not even noticed that the building was occupied – which it had been, continuously, by the owner, for the last seventeen years. That being so, I guess it’s absurd to expect them to have noticed gaps in the mortar joints that you could drive a truck through. I’ve been told that the inspections are visual only, exterior only, and cover the maintenance of heritage features rather than structural issues. Dennis Van Staalduinen, executive director of the Wellington West BIA, wondered aloud to the CBC whether the inspectors “even got out of their car.” That assumes, of course, that the inspections aren’t done on Google Street View.

The unavoidable conclusion is that these inspections are yet another example of bureaucratic box-ticking, myopically focused on process and unconcerned with actual results. I doubt this is the fault of the inspectors; they can only do what they are mandated and authorized to do. But those who create the boxes to be ticked have a lot to answer for. In fact, if anyone had happened to be walking by Magee House at 6:30 on July 24, I would need to replace the words “woefully inadequate” with “criminally negligent.”