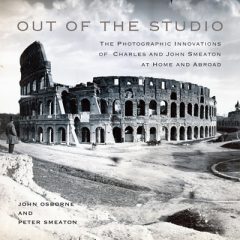 Out of the Studio, by John Osborne and Peter Smeaton, documents the life, oeuvre, and achievement of Charles Smeaton and his younger brother, John. Launched by the opening of their “photographic gallery” in 1861, they developed a reputation in Quebec for images of contemporaneous people, places, and events taken in challenging outdoor settings. Smeaton pictures of the aftermath of the Great Fire of Quebec in 1866 helped bring an understanding of the disaster to an international audience; images featuring the gold mining industry were displayed at the Exposition universelle in Paris the following year. When Charles travelled to Europe in 1866, he accomplished a feat previously thought impossible, taking the first successful photographs in the Roman catacombs. John moved to Montreal in 1869, where he worked for newspapers and developed techniques for the direct transfer of photographs into print without the necessity of intermediary engravings.

Out of the Studio is the first comprehensive biographical study detailing the innovation and imagination of the Smeaton brothers and their legacy of images across two continents.

Out of the Studio is published by McGill-Queen’s University Press, August 2022.