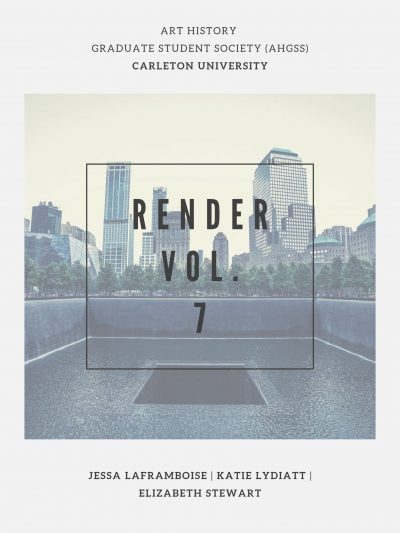 I am excited to announce the seventh volume of Render. The papers published in this edition, although dealing with contrasting topics, share connective themes and contribute to scholarly debates concerning art and representation, museology, difficult histories, memory studies, trauma, activism and feminist art. Thank you to the authors featured in this volume for their quality research and their commitment to enhancing scholarship in Carleton’s Art History and Visual Culture community: Jessa Laframboise, Katie Lydiatt and Elizabeth Stewart.

This edition would not have been possible without the labour and enthusiasm of the 2018-2019 Render Editorial Committee. Firstly, thank you to Katie Lydiatt who served as my Assistant Editor and who will be carrying on the role as Editor next year. Katie’s dedication and insight contributed much to Render this year and I wish her success as she leads the expansion and growth of our graduate journal next year. I would also like to extend my gratitude to my editorial committee, consisting of Beth Shepherd and Annika Mazzarella, whose contributions included the selecting and editing of this edition, as well as their consultation in a series of meetings concerning the growth and new directions for the future of Render. On this note, I would also like to extend my thanks to Emily Putnam, PhD Candidate in Cultural Mediations and former Editor of Render, and Dr. Peter Coffman, SSAC faculty representative of Render, whose guidance and experience was crucial to the success of the journal this year.

It has been an honour to serve as Editor this year.  It is my hope that the developments our team initiated this past year, which included ongoing conversations which sought to expand the status and scope of the journal, will continue in the future and that this publication will further promote graduate student scholarship in art and cultural studies.

You can read Volume 7 of Render below.

Through a consideration of feminist performance art from the twentieth century, this paper seeks to explore three categories of performance – the temporary live, the private documented and the trace of a performance. These categories are sustained by essential differences which are present in performance, and they ultimately assist in promoting certain thematic intentions. In works which navigate themes of gender, identity, the female body, commodification and femininity, these three categories provide readers with the ability to understand the diversity of feminist performance art, its various methods and techniques and recognize priorities that artists seek to portray. Beginning with an overview of second-wave feminism and performance art the remainder of this discussion will reveal the specific characteristics which make up each category of performance by introducing examples and concepts which pertain to either the temporary live performance, the private documented performance, and the trace of a performance. Additionally, this paper will consider notions of gender performativity, the use of the explicit body in performance and feminists artists interest in performance art to help contextualize the discussion.

“Photography ‘75: The Still Photography Division’s “Women’s Show” as an Act of Subtle Protest”
by Katie Lydiatt

This paper examines a largely under-explored exhibition organized by the Still Photography Division in Ottawa in 1975, appropriately titled Photography ‘75. Featuring the works of eighty-three women photographers, the show was organized around the distinction of the year 1975 as the International Year of the Woman. Although it claimed to capture a “feminine way of seeing” and a national vision of Canadian life, this exhibition marked a significant contribution to the history of Canadian photography through its engagement with contemporary debates surrounding photography as art, and women’s roles as practitioners of the medium. While the exhibition’s opinions on women and photography date itself, it was successful at professionalizing women artists and contributing to collections of female photographers in the Canadian Museum of Contemporary Photography (CMCP) and the Canadian Photography Institute (CPI) at the National Gallery of Canada (NGC).

“Where Were You on That Day?: A Critical Analysis of the National September 11 Memorial Museum” by Elizabeth Stewart

The attacks of September 11, 2001 lasted a total of one hundred and two minutes and killed nearly three thousand people from ninety-three countries. Today, 9/11 is considered to be one of the most historically significant moments in world history. The National September 11 Memorial Museum opened on May 21, 2014, and was erected to tell the story of 9/11 and to recognize the tragic event’s enduring impact on the United States and the world. How does the 9/11 Memorial & Museum serve such a vast audience, and manage unavoidable controversies that arise when converting Ground Zero into a place of remembrance? How does a space mark mass suffering? I argue that, considering the unique and varied audience of the museum and due to some of the challenging spaces and objects within the museum, the National September 11 Memorial Museum only accomplishes certain aspects of its mission statement. In this article, I explore the successes and shortcomings of the 9/11 Memorial & Museum using specific exhibitions and museum spaces as the basis for evaluation.