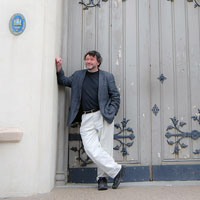 I am an architectural historian whose fate was sealed many years ago when I caught my first glimpse of Canterbury Cathedral from a train window. My infatuation with the Middle Ages gradually expanded to include later re-inventions of medieval forms – particularly Canadian Gothic Revival architecture, which is now my main area of research. An overarching theme in my current work is the exploration of the many cultural and political meanings that have been attached to the Gothic style from the twelfth century to the present day.

In the History and Theory of Architecture (HTA) program at Carleton, we explore the history, meaning and social significance of the built environment, and how it both reflects and shapes human circumstances. We also study the theoretical foundations of architectural movements ranging from Antiquity to the present day. The interdisciplinary strength of Carleton University, plus the spectacular research resources of the City of Ottawa, make HTA an exciting place to be.

I have a diverse background and eclectic interests. I was a photographer in a previous (professional) life – indeed, I may be the only architectural historian ever to have won a music award for photography. My most recent solo exhibitions were Anglicana Tales, an exhibition of architectural photography at the Dalhousie Art Gallery (2010), and Camino, at ViewPoint Gallery in Halifax (2009). Within the past year, my photographs have illustrated two books: Exploring the Capital (by Andrew Waldron, Figure.1 Publishing), and Camino (Wintergreen Studios Press), which I also wrote.

“The Introduction of Ecclesiology to Nova Scotia”, Studies in Victorian Architecture and Design Vol. 4: Ecclesiology Abroad, London: The Victorian Society, 78-93 (2012)

“St. John’s Anglican Cathedral and the Beginnings of Ecclesiological Gothic in Newfoundland” Journal of the Society for the Study of Architecture in Canada, Vol. 31, No. 1, 3-22 (2006)

“The Influence of Southwell Minster on Romanesque Churches in Nottinghamshire” co-authored with Malcolm Thurlby, Transactions of the Thoroton Society, Vol. 104, 37-46 (2000) I invite you to explore some images of Canadian and Medieval European architecture that features in my research and teaching. (The links will launch a pop out window, click on the small “X” in the upper right of the image to close the window.)