Tori Almond recently had a critically important conversation with her three young sons, a conversation that parents of white children will never have to have. Tori talked to her boys about how to avoid getting killed by the police just because of their skin colour.

“My biggest fear is that I will have to bury one or more of my children,” says Tori. “A mother should never have to bury her kids just because some racist cop has a God complex.”

A single mom to 15-year-old Malik, eight-year-old Jayden, and six-year-old Deavon, Tori says it’s a fine balancing act between educating her children about the genuine threat they could face if they ever run into one of the ‘bad’ cops, and not scaring the boys so badly they become fearful of going out in the world. Yet, she admits she fears for them every time they leave the house.

“The racial injustice and racial profiling is a very real threat to them, even though I have educated them, explained to them that when we go out to try and keep a smile on your face and look personable, and to always be respectful to everyone.”

When asked what she has told her children in regards to the police, Tori says she has given them very specific and detailed advice.

“I have told them if or when they come in contact with the police to always use ‘yes Ma’am, no Ma’am’ and ‘yes Sir, no Sir,’ and keep your hands where they can see them and DO NOT make any sudden movements. And always have your phone recording while interacting with them.”

Tori worries most about her oldest son, 15-year-old Malik, because the teen is going out with his friends more. “All I can do is pray that he uses what I have taught him. All I can do is educate [all of] them so they have the knowledge and power to make positive change in their lifetime.”

One way this Kansas City based family decided to make a positive change was inspired by Tori’s sons wanting to make a contribution to the ‘Black Lives Matter’ protest currently happening all over the globe. However, Tori didn’t feel it would be safe for her sons to march in the streets.

“The protests here have gotten out of control a few times. They were looting stores and throwing frozen water bottles at the police. The police used tear gas on the protestors.”

When Tori suggested her sons could make protest signs to hold and display on their front porch, they instantly agreed. Tori says she felt incredibly proud but wasn’t surprised by their desire to try and make a difference in this world. 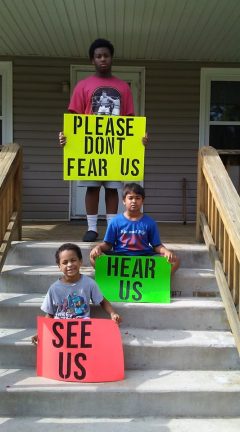 From top to bottom: (15-year-old Malik, eight-year-old Jayden, and six-year-old Deavon.) These three brothers wanted to add their voices to the ‘Black Lives Matter’ protests, and thanks to their mom’s suggestion, decided to display their own protest signs from their front porch. Credit: Tori Almond

“I’m so proud of Malik because he has overcome each and every obstacle that this world has put in his way. I am proud of Jayden for wanting to fight for his race and help change the world. And I’m proud of Deavon because, even though he is on the autism spectrum, he gives his all in everything he does. I am proud of all three of them for wanting to take a stand and try and teach others about loving each other.”

If Tori could have a sit-down meeting with President Trump, she’d have some advice for her country’s leader.

“I would tell Trump to get out of the way and let someone who ain’t racist help this country. If I thought he would really help I would tell him he needs to sit down and listen to the protestors. They have to fix the justice system so it is equal for all races and they need to charge cops with murder and abusing their badge.”

Tori is quick to add that she doesn’t consider all police officers to be ‘bad’ and believes that many do care and are trying to do a good job. But they need to be held to a higher standard.

“Their job is to protect and serve everyone, not just their own race. I think they are starting in the right direction by addressing the cops involved with the George Floyd issue, but the rioting is about the bigger picture. Blacks want the same opportunities that the white people have and they want it without all the extra hoops they have to jump through. I think if the President would start listening to them that will be the first step in the right direction.”

Tori believes white people are missing the point when it comes to what the ‘Black Lives Matter’ movement is about.

Tori says being proactive is important to keep her sons as safe as possible. That’s why she recently approached a police officer in her community and asked if he’d be willing to meet with her sons. The police officer not only instantly agreed, he said he would ask around and get some other officers involved as well. After getting their sergeant’s approval, several police officers showed up and, after chatting with Tori’s sons for a while, she asked them if they would like to take a picture with her boys’ signs. “To get the message out not to be afraid of them either.”  The police, who had come bearing gifts, didn’t hesitate.

“I also talked to the sergeant about some of the issues,” says Tori, “and now we’re going to do some community events with the police in each division. So, I’m excited and so are the kids.”

The three boys said they had fun with the police officers. Afterwards, Malik even tried to reassure his mom that she doesn’t have to worry as much anymore, saying, “What do I have to be scared of? I know how to interact with them now, so I shouldn’t have to be afraid, Mom.” 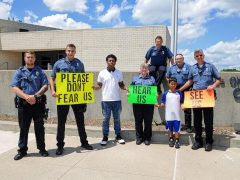 Tori Almond approached her local police department to meet with her three sons. Much to the family’s delight, the police officers were happy to comply and even posedfor a picture holding the boys’ porch signs. Credit: Tori Almond

Eight-year-old Jayden said it was cool taking pictures with the police officers and was thrilled when the boys were gifted with colouring books, baseball cards and bracelets. Tori says after the meeting, her sons are now less fearful.

“Which is great. But I’m always going to be fearful for them. That’s my job as a mom. I know there’s a chance even if they do everything right, for a bad cop, it won’t make a difference. But they don’t need that worry. It’s a burden that’s mine as a mother to carry. I will keep teaching them and continuing to educate and advocate for them and that’s all I can do.”

Tori believes having a relationship with the local police is important.

“We can work with them to help them understand there’s nothing to fear in the colour of skin.”