Our group is mainly interested in the development of precursors and processes for atomic layer deposition (ALD); we were the first academic research group in Canada to work in this field.

As synthetic chemists, we try to determine the mechanism of the surface chemistry and thermal decomposition routes to better design precursors and tune our processes. We look at many different processes and target films, but some themes can broadly be drawn through our work. 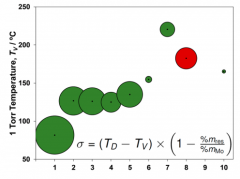 Our group has investigated families of precursor compounds to discover what structures within the ligands, and which ligands within the molecule change the thermal characteristics of the precursor. This has led us to define the figure of merit (here for Au, here for Mo).

This figure of merit balances the thermal range of the precursor (from the onset of “sufficient” volatility to thermal decomposition) with the residual mass upon decomposition. This gives us an idea of how effective a precursor is at being heated in a bubbler and being delivered to a furnace.

We have been interested in group 11 metals for several years, and have contributed to precursor and process design for copper and gold metal ALD solutions. 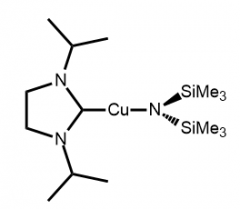 We employ guanidinates, iminopyrrolidinates, and silylamides as anionic ligands for copper metal precursors, occasionally employing carbenes as a neutral coordination ligand to complete the coordination environment for Cu(I). The best example of a precursor is a hexamethyldisilazido N-heterocycliccarbene copper(I) that deposits using a thermal process on a noble metal or with plasma hydrogen on silicon and glass.

We have also reported the first ALD deposition of gold metal using plasma oxygen and water, with followup examples of hydrogen plasma and ozone processes. These processes use a trimethyl trimethylphosphine gold(III) precursor that is a liquid at room temperature and exhibits surprising stability to oxygen and water.

We have been interested in group 13 chemistry from our first group publication, and have published several mechanistic thermal studies and process development papers. We remain interested in gallium precursors like this diethyl amidinato gallium(III) compound because of the difficulty in tuning these precursors to thermal deposition of nitrides. We have found that the trisguanidinato compounds are easy-to-make precursors with a lot of promise, and continue

to look at precursors like this trisguanidinato indium(III) compound that undergoes chemical vapour deposition at moderate temperatures with water to for thin indium oxide films.

We have tested fundamental precursors like trimethyl gallium to fine-tune2 CVD processes.

We have written several reviews in the last little while that summarise our research quite well. Keep scrolling to see publications by year: