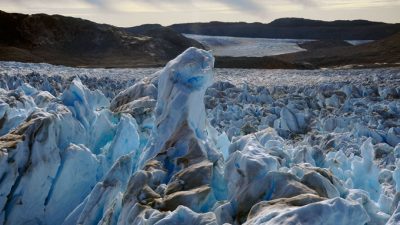 Light-absorbing particulate matter (like BC) that deposits in the Arctic darkens the ground and enhances the rate of snow and ice melt. ©Konrad Steffen/CIRES, University of Colorado via U.N. Arctic Monitoring and Assessment Programme.

It is currently estimated using satellite imagery that 140 billion cubic metres of gas is flared annually within the global oil and gas industry; with approximately 90% of volumes attributable to the upstream sector.  One important pollutant emission from flaring activities is soot, also known as black carbon (BC) when measured optically.  BC consists of mass fractal-like aggregates of nano-scale carbon spheres.  BC aggregates that typically contain hundreds of these spheres are generally smaller than 2.5 microns in size, classifying BC as a PM2.5 emission.  Anthropogenic emissions of BC are concerning in the context of public health – ambient PM concentration is the leading environmental risk factor for death, with BC recognized by many as the key constituent of PM in this regard – and climate change, since BC is associated with a markedly strong warming effect.  The latter concern is an artefact of the high absorption efficiency of BC aggregates alongside their strongly forward scattering nature.  Despite the sheer scale of global gas flaring and the public health/climatic concerns of anthropogenic BC emissions, challenges in the measurement of BC emissions from flares has precluded robust characterization of this important emission source.  Measurement data are badly needed by climate modellers and governmental policymakers alike.

The challenge and motivation

Until recently, and despite the notable climatic concerns over BC emissions from flaring, no quantitative emission measurement technique has existed.  The current measurement standard, U.S. EPA’s Test Method 9, allows for a qualitative assessment of plume opacity based on visual measurements by a trained human observer.  Unfortunately, this aesthetic technique is inconsistent in that the appearance of plume opacity can be drastically effected by the plume’s “reflection” of skylight and sunlight; additionally, opacity, as observed over the spectrum of a non-linearly responsive human eye, is not truly representative of BC loading within the plume.  To provide industry, regulators, and modellers with a tool to objectively and quantitatively measure BC emissions from gas flares, the EERL collaborated with the National Research Council of Canada in the development of a new optical tool – sky-LOSA. 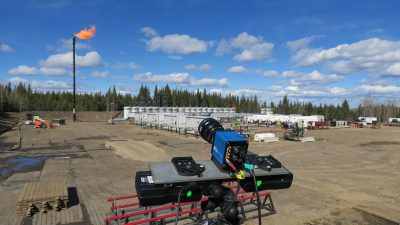 The sky-LOSA camera acquiring image data near Grande Cache, Alberta. Images acquired in the field are post-processed at EERL in Ottawa. Processing of ten minutes of data now takes approximately three days, down from two months when sky-LOSA was first developed.

Sky-LOSA (line-of-sight attenuation using skylight) is an imaging technique that enables the quantification of instantaneous BC emission rate through an artificial control surface within the image plane of a scientific camera.  In the field, high speed, grayscale image data are acquired over a narrow bandwidth where optical properties of BC aggregates are well known.  Consideration of these optical properties and detailed consideration of radiative effects within the plume, allows for use of the perceived optical transmittance (or, opacity) of the plume to be corrected for in-scattered skylight and sunlight.  Coupling the corrected transmittance of the plume, which is indicative of BC loading in the plume, with the two-dimensional plume velocity in the image plane (computed via image correlation velocimetry) enables the calculation of the time-resolved BC emission rate through the control surface.  Within the sky-LOSA algorithm, a comprehensive uncertainty analysis is implemented using advanced Monte Carlo methods.

To date, sky-LOSA has been deployed in nine field measurement campaigns in Uzbekistan, Mexico, Ecuador, and Alberta with support from industrial (Petróleos Mexicanos, Petroamazonas), national (Petroleum Technology Alliance of Canada, Natural Resources Canada) and international (World Bank Global Gas Flaring Reduction (GGFR) partnership, United Nations Environment Programme’s Climate and Clean Air Coalition) partners.  Data from 24 measurements of 15 unique flares indicate a vast range of absolute BC emission rates, exceeding four orders of magnitude (from 3 mg/s to more than 50 g/s).  These data are proof-positive that BC emissions from flaring are subject to the super-emitter challenge that is observed for many emissions; i.e., a relatively small number of flares contribute disproportionately to global emissions.  Sky-LOSA is a useful tool to aid in the identification of super-emitting flares.  Additionally, sky-LOSA can be used to assess the efficacy of emissions mitigation efforts via pre- and post-mitigation sky-LOSA measurements. In fact, in collaboration with the World Bank GGFR and Petroamazonas, sky-LOSA is currently being used to support Petroamazonas’ innovative “virtual pipeline” project where flared gas is being diverted to provide site power at their facilities in Ecuador’s Amazon basin. 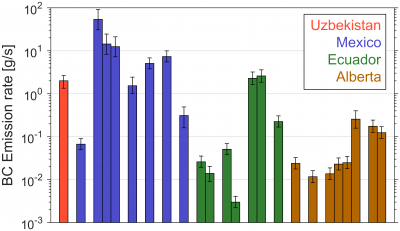 During the latter measurement campaigns, additional data was acquired in the field to quantify BC yield, the ratio of BC emissions to flared volume.  A key objective of this work is the derivation of a BC emission factor (BCEF) model for flaring.  Using EERL’s first field-measured BC yield data from Ecuador, a BCEF model was developed and published in Environment Science & Technology. For these specific data, a BCEF model was derived based solely on flare gas energy content (specifically, higher heating value (HHV)).  This BCEF model extended the range of previous iterations from EERL laboratory data with a number of important implications.  For example, it was estimated that the current emission factor used in the GAINS model was low by 30-90%; a result that implies current estimates of flare BC emissions are drastically underestimated. Interestingly, in the Canadian context, the HHV-based BCEF suggests that emissions from flaring in Alberta are likely overestimated, perhaps by as much as an order of magnitude, due to the relatively light flare gases observed in Alberta. 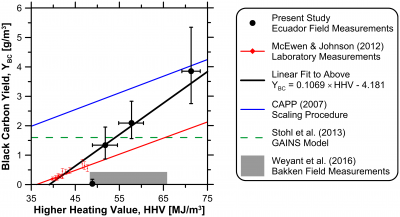 Opportunities for M.A.Sc. and Ph.D. students exist within the sky-LOSA project.  Interested students should refer to graduate opportunities in the EERL and with FlareNet for further details. 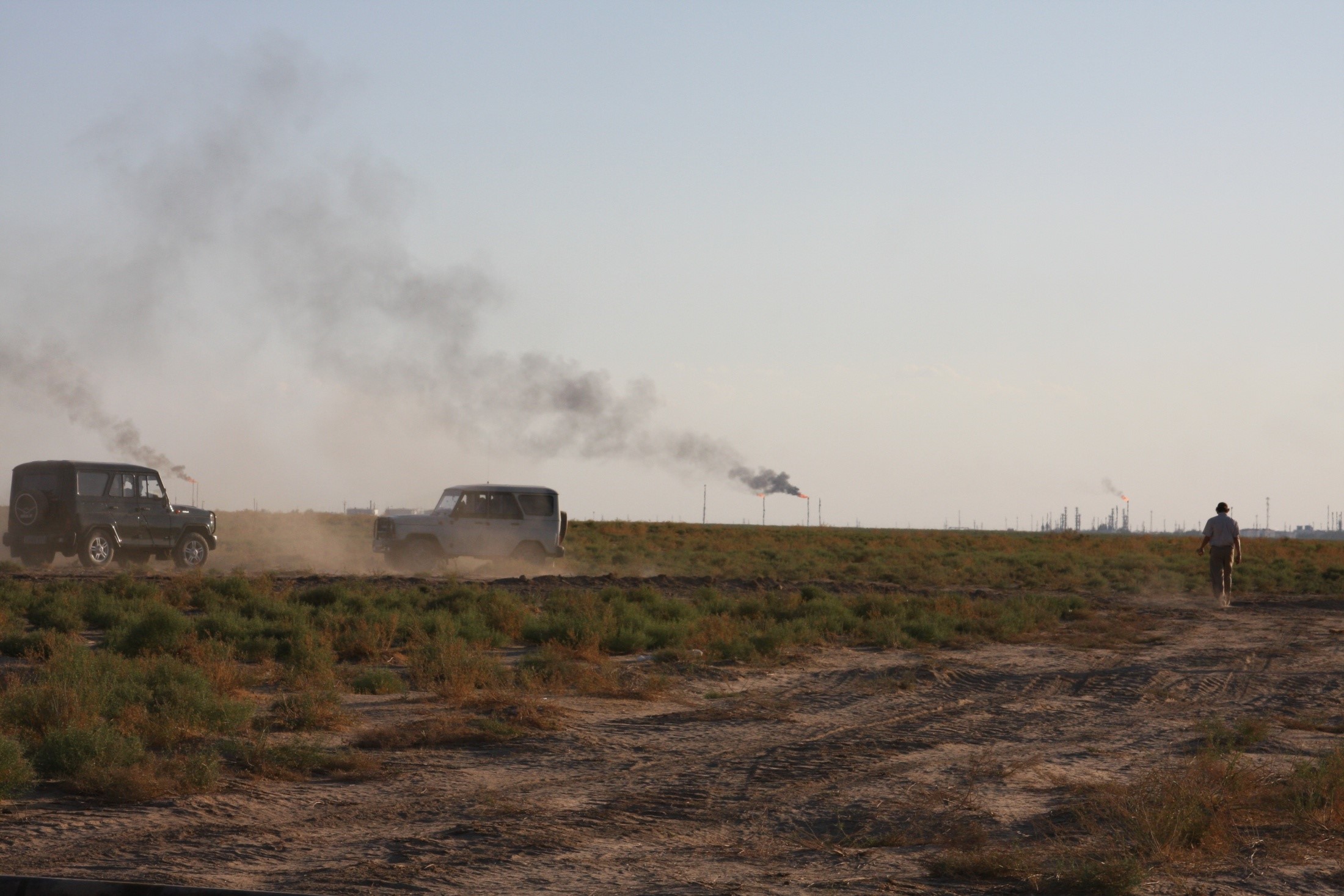