Book Review: How to Fix Your Academic Writing Trouble

How to Fix Your Academic Writing Trouble 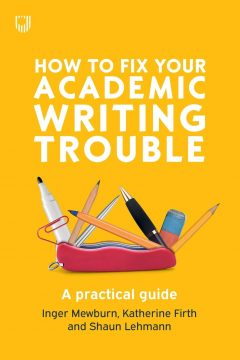 Graduate students seeking advice on academic writing have access to a growing list of books that guide them through the process of becoming strong academic writers. Unlike many such guidebooks, which tend lay out the process from start to end, How to Fix Your Academic Writing Trouble: A Practical Guide follows a different approach: the authors organize their addition to the genre around the typical feedback graduate students receive, before providing techniques and suggestions as to how to fix these common issues. According to the authors, this is not a “how to” manual but a recipe book whose chapters address common, frustratingly vague feedback such as “Your Writing Doesn’t Sound Very Academic,” “Where’s Your Evidence for This?” and “Your Writing Doesn’t Flow.”

Though presented as “a practical guide,” the book’s most refreshing feature lies in the authors’ capacity to provide both practical, concrete advice as well as a high-level treatment that helps the reader appreciate the historical and linguistic roots of the feedback they receive. By doing so, they help readers understand their writing troubles at the conceptual level before offering them concrete suggestions as to how those troubles might be remedied.

For instance, the authors explain the reason non-native speakers of English tend to receive feedback related to the vagueness of their prose. Through a discussion of high-context vs. low-context languages, the authors explain that English, unlike many other languages, is a low-context language that requires writers to take into account that “the recipient of the communication is not expected to work hard to understand what they are hearing or reading.” In other words, “if you are told your writing is vague, you are [possibly] writing in a higher-context mode than the reader.” Having provided a conceptual explanation of this issue, the authors then go through a list of practical techniques that allow writers to write in a clear, crisp, and structured manner.

Another noteworthy example of this feature is the discussion on how the Norman Conquest of England created a a cultural and linguistic split between Latinate and Germanic words: words of Latinate origin became associated with learned discourse, whereas those of Germanic origin became associated with everyday language. Thus, if an aspiring academic writer is told their writing “doesn’t sound very academic” or that it is “chatty or conversational,” one technique the writer could use involves changing Germanic words with Latinate ones: large instead of big, advantageous instead of good, consider instead of think about. You don’t give participants forms to fill in; you provide them with forms to complete—a simple fix to what might seem as an intractable problem. The authors are careful to caution against overusing this technique so as not to sound stilted or pompous. They also caution against dealing with issues related to tone through making one’s writing unnecessarily complex—a common response to this type of critique.