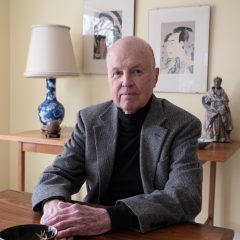 Professor Emeritus Carl McMillan discovered his passion for Russian Studies through years of living and travelling abroad. That passion would ultimately lead him to Carleton in 1968, where he would become one of the first directors of what is now known as the Institute of European, Russian, and Eurasian Studies (EURUS).

His nomadic lifestyle started early. The son of a U.S. naval officer, McMillan spent his childhood moving from one naval base to the next, in the United States and overseas. He graduated from Yale University with a B.A. and M.A. in International Relations before beginning military service in the U.S. Navy. After completing officer training, he was sent for a year of intensive Russian language training at the Navy’s language school in Washington, D.C.

McMillan completed his military service and joined the U.S. Foreign Service, where he worked first on the Philippine desk in the State Department. Later, he was assigned postings in the U.S. embassies in Manila and Moscow—before which he completed a year of advanced Russian language and area studies in Germany. Deciding to make use of his training and experience as an academic specialist, he enrolled in the Ph.D. in Economics program at Johns Hopkins and wrote his Ph.D. dissertation on the Soviet economy.

As McMillan considered his employment options post-graduation, he was drawn to Carleton. “Carleton appealed to me for many reasons,” he recollects. “But Carleton’s interdisciplinary undergraduate honors program in what was then called ‘Soviet and East Europeans Studies’ is what brought me to Carleton in the late 1960s.” In 1971, the program became an institute—which was later renamed ‘EURUS’—and an MA program was added. McMillan served as the institute’s director for two terms.

Dr. McMillan retired after 30 years at Carleton. He recalls his time fondly, saying: “Teaching at Carleton was a gift. It enriched my life in so many ways, not only professionally but in terms of lasting friendships.”

Now, 50 years later, his affinity for Carleton remains. In 2018, after having committed to a gift in his will years prior, he decided to establish the McMillan Chair in Russian Studies, creating an endowed Chair that will support teaching and research excellence within EURUS.

When asked about his reasons for supporting EURUS, McMillan is pensive. “I agreed in the mid-1980s to return from an early retirement and serve as acting director of the institute. We were battling university cutbacks and interdisciplinary programs in particular were being threatened—I was literally fighting for the survival of the institute. While EURUS is thriving now, it is nice to know there is an endowed gift in place that can provide support in tough times. I hope the Chair will contribute to the long-term growth and success of the institute.”

Professor McMillan worked closely with Carleton’s planned giving team to establish the Chair. “It couldn’t have been easier,” he says of the process. “The team gave me great advice about giving options that made the most sense for me.”