From the Hamilton Spectator to Carleton’s School of Journalism: The Continued Legacy of Brian Nolan 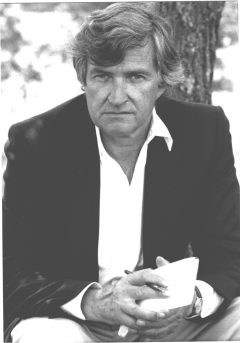 Hollander (Holly) Layte remains in awe by the idyllic scenery surrounding her home in British Columbia—a feeling that hasn’t escaped her since moving away from Ottawa following the passing of her late husband, Brian Nolan. During the spring and summer, cascades of blue and purple wisteria flowers climb up onto her balcony and mingle contentedly with scarlet begonia, bright red geraniums, numerous song birds and iridescent hummingbirds. “It is inspirational, she says. “Simple words cannot describe it.”

On our telephone interview, she recounted the enormous legacy that Brian left behind as a soldier, international reporter, producer, writer and Associate Professor of 18 years in Carleton’s School of Journalism—which is soon to celebrate its 75th anniversary.

“In all respects, Brian was not only a top-notch and well-respected journalist, but he was also the embodiment of a true ‘renaissance’ man,” Holly remembered. “He continued to mentor students, who shared his insatiable curiosity, gift for storytelling and unmatched passion for practicing journalism with honour and integrity right up to the day of his passing.”

It was the above that provided the impetus for establishing The Brian Nolan Memorial Prize for Graduate Journalism, which will provide funding to Master of Journalism students who are pursuing a Master’s Research Project.

“Two main goals were accomplished when I established this Award,” Holly said. “Brian’s contributions to journalism will continue to be remembered and future Carleton journalists will be able to continue telling stories that need to be told,” she said.

Proud moments for Brian included winning a British Prix Anik Award, getting an Emmy nomination for a documentary (The Last Nazi) he co-produced about Albert Speer, head of Hitler’s armaments program, and authoring or co-authoring best-selling books on Canada’s military.

Although Brian’s repertoire includes producing documentaries for ABC, CBC, CTV and Global television networks, his sights weren’t set on journalism until he started a summer job at The Hamilton Spectator, which he landed after serving for the US Army in the Korean War.

Holly expressed the ease of working with the Planned Giving team to help set up the bequest last fall and said she views this award as both an opportunity to both remember Brian’s legacy and to give back to the community in an important and meaningful way.

“I believe that Brian would be pleased that an award will be established in his name to help sustain journalism and journalism students both locally and internationally. As for me, I am now at peace and grateful at having had the opportunity through Carleton to ensure Brian’s legacy and passion for journalism will live on through this gift.”