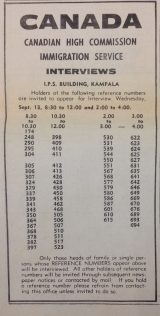 Advertisement for interviews at the Canadian Immigration office, Kampala. September, 1972.

Wayne Bennett was a Canadian University Students Overseas (CUSO) Cooperant in Uganda from 1970-1972. During this period, Bennett collected newspaper clippings he found interesting from the Uganda Argus. These mainly consist of articles on international diplomatic relations and the “goings on” in Southern Africa.  Some local concerns are also represented, especially popular news, and television. Bennett preserved these clippings in three different scrapbooks, each of which is now part of Archives and Special Collections.

The clippings from the newspapers give insight into Ugandan popular political opinion leading up to and during the Asian expulsion in 1972. Bennett collected articles before and after Idi Amin’s successful coup as well as those reporting on Amin’s announcement of the expulsion. While he followed the story of the Asian expulsion in 1972, Bennett also gathered news stories on a number of political issues and events in Uganda during his time there. He took interest in the report of two murdered Americans, the Martin Meredith – Amin issues, the expulsion of Israelis and mysterious deaths occurring in the army. Bennett’s scrapbooks offer insight into how the Ugandan press dealt with the country’s political environment under Amin as well as the public reactions to the Asian expulsion.

The following scrapbooks contain clippings and articles from the Uganda Argus newspaper, Carleton University does not hold copyright for the Uganda Argus articles, and they are posted here for educational purposes only.