The Ugandan Asian Refugees in Canada

In 1970 Canada decided to broaden its refugee policy beyond the confines of Europe and to embrace a universal approach to admitting refugees. The nearly 8,000 Ugandan Asians accepted by Canada between 1972 and 1974, following Idi Amin’s expulsion order, constituted the Canada’s first major resettlement of non-European refugees in Canada.  Many Ugandan Asian refugees had business or professional experience which, combined with fluency in English, enabled them to adapt rapidly to their new country. Since arriving in Canada the Ugandan Asian community has flourished and the second generation is found in all walks of life. 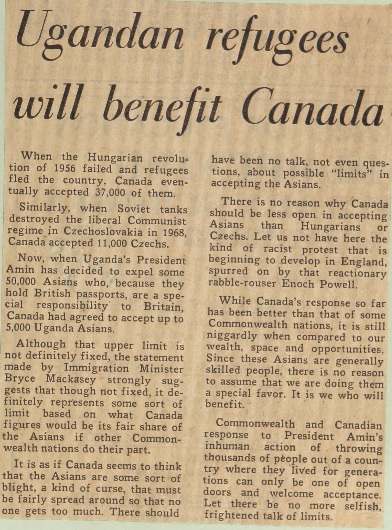 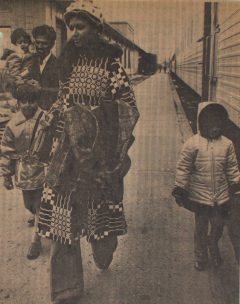 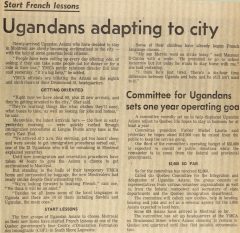 While the Indochinese refugee movement actually began in 1975, by 1979 massive numbers of people were risking their lives fleeing genocide, retribution, ethnic cleansing and persecution by the victorious communist regimes in Vietnam, Laos and Cambodia. Those fleeing Vietnam were known as ‘Boat People’. Most refugees first fled to neighboring Southeast Asian countries. As the number of refugees escalated, many were forbidden to land in these asylum countries and perished at sea. The United Nations appealed to the international community for assistance and a massive resettlement operation was spearheaded by the United States, Canada, Australia and France.The Canadian government agreed  to resettle 50,000 refugees (later increased to 60,000) and appealed to ordinary Canadians to participate by sponsoring 21,000 of the Indochinese refugees through the newly establish Private Refugee Sponsorship Program. Canadians sponsored 39,000.

Unlike the Ugandan Asian refugees, many of the Indochinese had less exposure to western culture and arrived with no knowledge of English or French. However, buttressed by their strong work ethic and family ties and with the aid of sponsors, volunteers, officials and nongovernmental organizations, most were able to overcome the trauma of their experiences and rebuild their lives. The Indochinese refugees in Canada have established strong communities from coast to coast, and their second generation, like that of the Ugandan Asians, is deeply embedded in Canadian society.