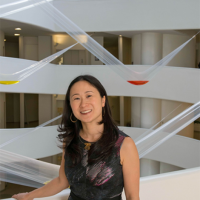 Ming Tiampo is a Professor of Art History at Carleton University in Ottawa, Canada. She is a scholar of transnational vanguardism with a focus on Japan after 1945. Tiampo’s book Gutai: Decentering Modernism (University of Chicago Press, 2011) received an honorable mention for the Robert Motherwell Book award. In 2013, she was co-curator of the AICA award-winning Gutai: Splendid Playground at the Solomon R. Guggenheim Museum in New York.

In addition to her work on Gutai, Tiampo has published on Japanese modernism, war art in Japan, globalization and art, multiculturalism in Canada, and the connections between Inuit and Japanese prints. In 2013, she co-edited Art and War in Japan and its Empire: 1931-1960 (Brill Academic Press). She is currently working on two books: Decentering Globalism is an interdisciplinary and methodological analysis of World Studies. Paris from the Outside In: Art and Decolonization considers Paris as a site of intersection to investigate the historical conditions of global modernism. Tiampo is a founding member of the Center for Transnational Cultural Analysis at Carleton University, serves on the advisory boards of the Institute for Cultural Inquiry Berlin, and the Tate Research Centre Asia, as well as sitting on the editorial boards of the Archives of Asian Art, the Canadian Art Review (RACAR) and the Journal of Asian Diaspora Visual Culture and the Americas (ADVA).

Tiampo’s teaching is concentrated in three areas: Postwar Japanese Art, Transnational Modernisms, and Curatorial Studies. In her teaching, she seeks to provide real-world experiences for her students, be it through exhibitions, visiting lecturers, or hands-on experiences.

Co-edited with Asato Ikeda and Aya Louisa McDonald, Art and War in Japan and its Empire: 1931-1960. Leiden: Brill Academic Publishers, 2012

“To Recapture the Light of a Star: Exhibiting Gutai at the Guggenheim.” In Anne Bénichou ed., Documenter/Recréer. Dijon: Presses du réel, 2014.

“Gutai Art on the World Stage,” “Biographies,” “Bibliography” and “Guide to Primary Resources,” In Gutai. Lugano: Museum of Modern Art, 2010.

“Distance and Mobility: Towards a New Understanding of Modernism.” In Distance and Proximity: Can There be Life without the Other? Lisbon: Gulbenkian Foundation, 2009.