Home / News / Freedom to laugh with “Tickling the Giant”

Freedom to laugh with “Tickling the Giant” 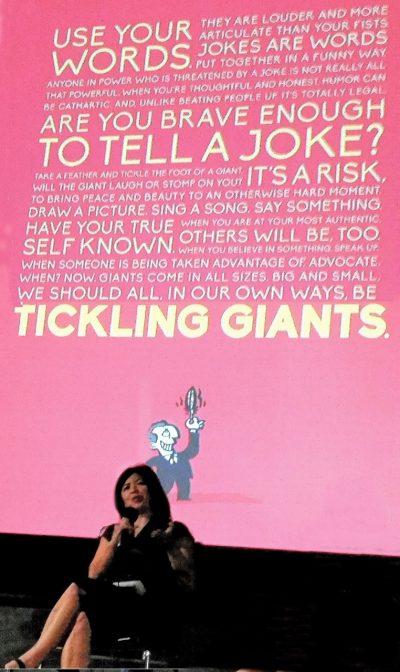 n June 7, 2017, Lim participated as a discussant in the screening of “Tickling Giants”, a new documentary directed by former Daily Show senior producer Sara Takslet, at the ByTowne Cinema, Ottawa. Following the story of the Egyptian comedian and political satirist Bassem Youssef, the documentary chronicles the power of humour and laughter in the face of oppression and threats to the freedom of expression.

“As protests over the president of Egypt, Hosni Mubarak, turned bloody in 2011, Bassem Youssef, a surgeon, sought to aid the injured. What he saw on Cairo’s streets was different than what was being discussed on television, so with the help of a friend he made an internet show that later became a network program. That program, “The Show” [Al Bernameg], poked fun at current events and politicians and became immensely popular. … “This show is about holding authority accountable,” Mr. Youssef says. It’s a brave stance in the face of oppression, and a worrisome one, too, knowing the threats he has encountered. This first-rate documentary generates similar mixed feelings at a time when freedoms seem to be threatened everywhere. After watching, you come away feeling more proud of those freedoms, and more concerned for their future.” (Ken Jaworowski, The New York Times)

TICKLING GIANTS was produced, written and directed by Sara Taksler, Senior Producer of The Daily Show with Jon Stewart, and had its World Premiere at the 2016 Tribeca Film Festival in New York City.

For more information on the film, watch the trailer below and visit: ticklinggiants.com