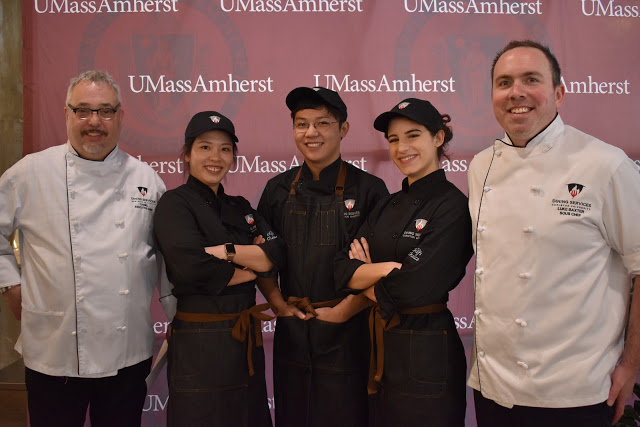 The sixth annual Student Iron Chef Competition was hosted by UMass Dining on February 23rd.The competition, which was based on flavor, plate representation, culinary technique and how each team personalized the meal, is special as none of the competitors are culinary students.

The Iron Chef competition was a fantastic opportunity for the Food Science students to work with the Carleton Dining team and represent Carleton as well as the Food Science and Nutrition. It was the second year Carleton has participated and the first time a Canadian University took the trophy home. Carleton’s Food Science students (“foodies”), Emma Khazzam, Hye Ryung (Grace) Park, and Zitian Zhang won both best appetizer and main for a clean sweep.

Carleton’s foodies cooked two dishes over the span of two hours. Their main dish was served tableside with a blue heirloom carrot chicken brodo that turned red in contact with the lemon juice in the bowl (using the pH dependent color change of anthocyanins).

We are extremely proud and thankful to all the hard work the students and other Carleton members put in for this achievement. Special thanks to Chefs Daniel Poulin and Lucas Baxter from Aramark who helped the students prepare for the competition, as well as, Jane Skapinker and Christine Stewart who helped with the logistics and marketing. We look forward to next year’s competition at the University of Ottawa and wish the best for them to keep the championship cup in Canada.