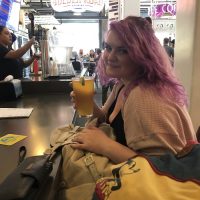 Mary is a puppeteer and aspiring Professor of Theatre and Performance Studies. Her research interests focus on disability theatre, performing profound disability, children’s theatre, and puppetry. Her love of puppetry began through a Carleton course on puppetry around the world. Since being introduced to puppetry, Mary has gone on to combine her interests of disability theatre and puppetry through the non-profit organization Teaching Awareness through Puppetry in Toronto, where she works with other puppeteers to teach young children about mental health and disability awareness. Inspired by her Drama Studies courses at Carleton, Mary went on to complete a Master of Arts at York University in Theatre and Performance Studies, where she researched, wrote, and created works of theatre on performing profound disability and on being a sibling of individuals with disabilities. She is currently in the process of becoming a PhD candidate for Theatre and Performance Studies.

The Drama Classes at Carleton taught me the theory and reasoning behind theatre, and it is this that I fell in love with and what inspired me to continue my education in Theatre and Performance studies. While I do love acting and directing, more than anything I love creating theatre and providing theory for my choices in my creations – this is what I learned to do in my Drama Studies Concentration.

In all honesty I chose Carleton because of the tunnels. However, when arriving at Carleton I immediately became integrated into the theatre scene of Ottawa and at Carleton. Carleton is home to two theatre companies, Sock ‘n’ Buskin Theatre Company (SnB), and Carleton Musical Theatre Society (CMTS), as well as an improv troupe. From the first week of my first year at Carleton I was immediately involved with creating plays, and by the time I had reached the end of my fourth year I had acted in over 10 productions, stage-managed, and had directed both a play and a musical. The Drama section in Carleton’s Department of English provided me the educational background in theatre, fully explaining to me exactly what it was I was doing in my extra-curriculars. It is this educational background that sparked my love of theatre; I fell in love with the ins and outs of theatre, rather than just acting or directing – the reasoning and theory behind the theatre is what inspired me, which is exactly what I learned from my Drama classes at Carleton.