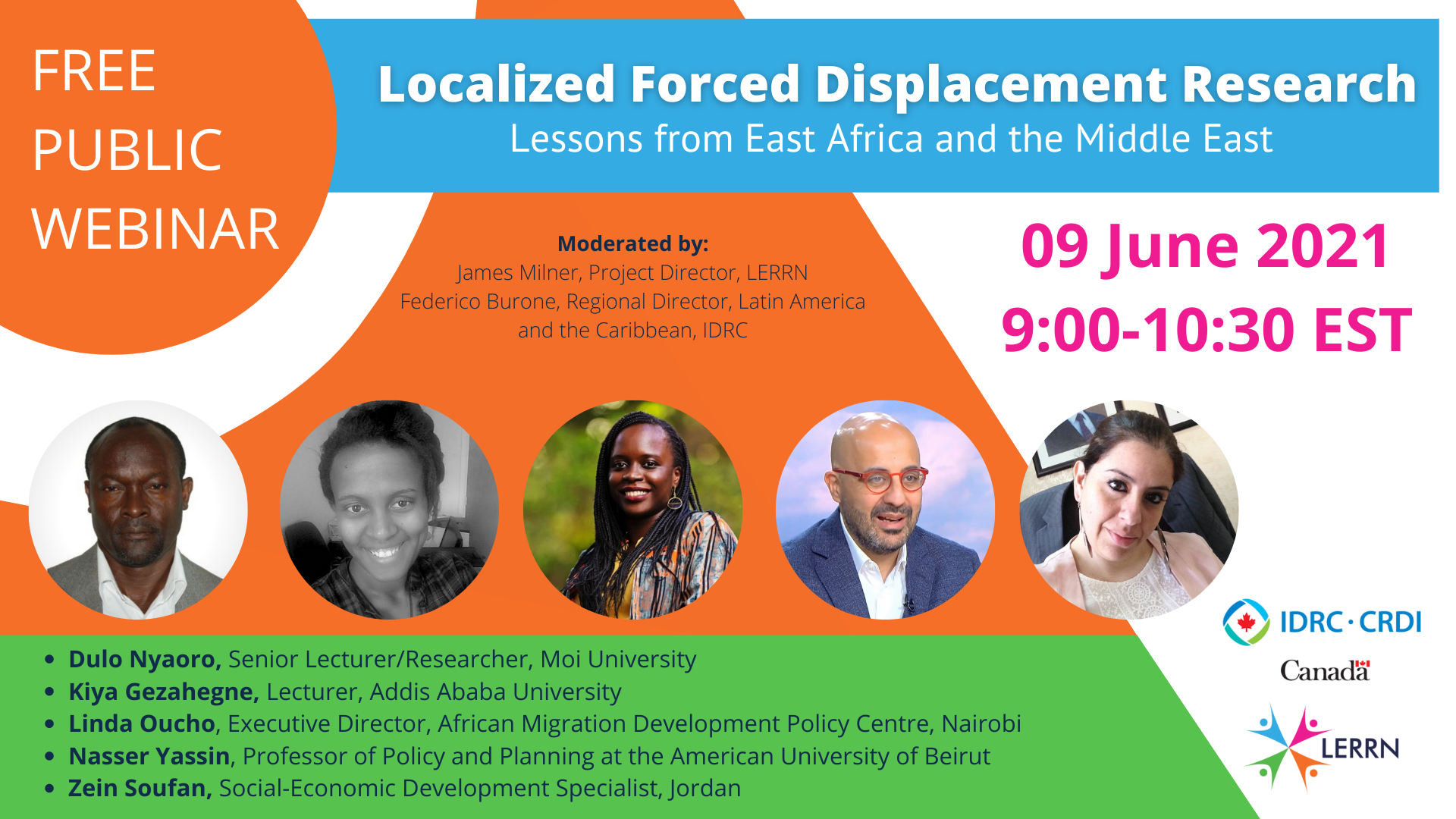 On 9 June 2021, the Local Engagement Refugee Research Network (LERRN) and the International Development Research Centre (IDRC) hosted the sixth of their Webinar Series on Forced Displacement to focus on localized knowledge ecosystems. The goal of the webinar was to showcase early results of their project on Localized Knowledge Ecosystem in East Africa and the Middle East. Drawing on findings from Kenya, Ethiopia, Lebanon, and Jordan, panelists shed light on how localized knowledge ecosystems collaborate to produce, translate, and mobilize knowledge to influence forced displacement policy and practice. The webinar also considered the impact these ecosystems have had in shaping protection and assistance for refugees in camps and urban contexts.

The concept of ‘knowledge ecosystem’ emerges from technology studies and strategic management to refer to networks that form around specific technological, scientific, or societal challenges, or among geographically co-located organizations in complementary fields (Bray, 2007; Järvi et al., 2018). As the concept has not yet been applied to the field of forced migration, LERRN researchers developed a definition of ‘localized knowledge ecosystems’ based on preliminary discussions and research. James Milner, Project Director of LERRN, provided this working definition:

“In the context of forced migration, localized knowledge ecosystems include actors with lived experience, research actors, practitioners who produce and use knowledge on forced migration (including, but not limited to, NGOs/INGOs, research centers, institutes, networks and universities and academics) who coordinate with each other to advance new knowledge production within this system and translate and mobilize this knowledge to influence policy, practice, action and discourses, and narratives to advance the well-being of refugees.”

Panelists were careful to distinguish between ‘local’ and ‘localized’ and knowledge ecosystems. Whereas ‘local’ simply refers to research and knowledge production taking place within a particular jurisdiction, ‘localized’ refers to activities that are driven by local agendas and where local actors had power and decision-making over agendas and resources.

These issues are far from new in the field of refugee and forced migration studies. Over 20 years ago B. S. Chimni (1998) argued that the expansion of refugee studies in the 1980s was intimately tied to the rise of a ‘new approach’ in the global refugee regime. Driven by the interests of Northern researchers and policy makers, this approach entailed a shift away from the politics of rights and state responsibility, toward policies intended to contain refugees in the Global South. Chimni called on scholars to develop a ‘new new approach’ to knowledge creation which would be sensitive to the “distorted international division of intellectual labour” in order to construct more humane and effective policies to improve the lives of those affected by forced displacement. Since Chimni, calls for the decolonization of forced migration studies have grown louder.

The webinar illustrated how Chimni’s concerns are as relevant as ever. Nasser Yassin, Professor of Policy and Planning at the American University of Beirut, argued that reliance on external donors, IOs, and INGOs drastically impacts the character of knowledge ecosystems in the Lebanese context. It is donors and a handful of large international actors which define the research agenda and set the priorities, and who use their resources to disproportionately support outside researchers and organizations. This not only limits the ability of more localized networks to grow and advance their own priorities, but it can also lead to ‘research waste’ (duplication or irrelevant research) and ‘research fatigue’ (a general malaise or annoyance toward research). There is also a risk that, despite the protracted nature of most contemporary forced displacement crises, external actors will lose interest in a particular country or initiative. While, local actors take long-term view of displacement, with research that continues after international interest in displacement research in a particular context starts to fade. Emphasizing this central role that localized knowledge ecosystem play, Yasin concluded that “we need to nurture such ecosystems that exist in places like Lebanon, Jordan or in East Africa or even in East Asia.”

Panelists also highlighted the multi-scalar operations of dynamic knowledge ecosystems in East Africa and the Middle East. Linda Oucho, Executive Director of the African Migration Development Policy Center in Nairobi, demonstrated that in the case of Kenya and Ethiopia, there are different knowledge ecosystems at the macro, meso, and micro scales (Figure 1). The macro scale refers to the national level, which includes well-resourced actors like the national governments and large international organizations who (to varying degrees) use evidence and research to generate policy. The meso scale refers to the decentralized level that includes local governments, INGOs, and other actors who implement policies and programs, interact with displaced and local communities, and generate information, evidence, and feedback on their activities. Finally, the micro scale refers to smaller organizations at the local level who have limited resources and generally conduct activities in their own interest. It is at this level, among the communities most affected by forced displacement, that we find informal actors and networks that could and should play a greater role in knowledge creation. 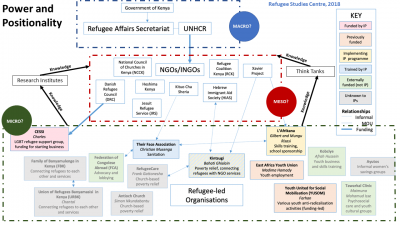 Kiya Gezahegne, Lecturer at Addis Ababa University, highlighted the example of Dagu – a traditional knowing and information sharing system used by the Afar People of Ethiopia. While this system has been used historically to spread news relevant to pastoral livelihoods, it is locally meaningful and holds promise for addressing issues of forced displacement.

Panelists also discussed how national political dynamics can impact the function of knowledge ecosystems. Zein Soufan, Social-Economic Development Specialist in Jordan, argued that while the Jordanian government has done well to influence the country’s refugee response plans and research agenda, there are jurisdictional dynamics which limit the full participation of municipalities. Specifically, the hierarchical nature of political authority leaves most of the country’s municipalities almost completely dependent on the national government for funding and policy guidance. This is not necessarily an insurmountable obstacle, but a factor that shapes the degree to which knowledge can be ‘localized’ to the ground level.

Soufan’s concerns touch on another important structural challenge that localized knowledge ecosystems in Lebanon, Jordan, Kenya, and Ethiopia face in influencing policy. Across the board panelists emphasized the disconnect between knowledge creation (at every scale) and the relatively insular practice of policy making. While Dulo Nyaoro, Senior Lecturer and Researcher at Moi University, highlighted that this can be improved through greater support to grassroots actors and increased collaboration among universities and other networks, which could create greater access to national and global policy making networks. How, when, and why forced migration policy networks interact with knowledge ecosystems was highlighted as a key opportunity for future research. Linda Oucho suggested that it is useful to study how evidence and research is ‘filtered’ as it moves from local, meso, to national scales. Still, as co-moderator Frederico Burone, Regional Director of Latin America and the Caribbean at IDRC, highlighted, the disconnect between research and policy may be the norm in the field of forced migration research that needs to be challenged.

When considering what lessons can be brought to scale, the primary recommendations echoed Chimni’s call for a ‘new new approach.’ Panelists underscored the prevalence of localized knowledge producers, mobilisers and users who are willing to take on greater control of knowledge ecosystems in forced displacement, and would benefit from greater support  to ensure their substantive involvement in national and global policymaking. This will likely require changes in funding models and coordination mechanisms to create space, but also an appetite for different approaches. As Nasser Yassin emphasized, there is a need for more non-traditional research which could include more resources for citizen science, evaluations, pilots, and experimentation. Whether or not these inclusive shifts translate to concrete policy changes at national or global levels is another matter, but they possibly hold the key to the development of a decolonized discipline of forced migration.

Click here to watch a full recording of this webinar.