Abstract: A method for separating an archaeological palimpsest into gender-based activities is of interest to all archaeologists because it enhances our study of ancient human behavior.

Glancing at an archaeological palimpsest often reveals a confusing accumulation of seemingly random pieces of the archaeological record. As a dense mass of living history of a culture buried over time on a single floor, it is often interpreted as a continuous and undecipherable sequence of events, sometimes by unrelated cultures. It is often ignored in archaeological interpretation because it is difficult or impossible to separate its activities or components. We offer a technique to decipher these components and give meaning to gender-based activities. A palimpsest is also created by constant use of a floor for years, if not centuries, by the same people and their descendants. In our study of the Canadian Barrenlands linking human seasonal activity with caribou herd movement, project members customized a web-based program to separate the following activities on one floor of a Rangifer hunting camp: core reduction, lance production and repair, butchering, meat roasting, marrow extraction, hide preparation and woodworking. All artifacts in the palimpsest are accounted for. 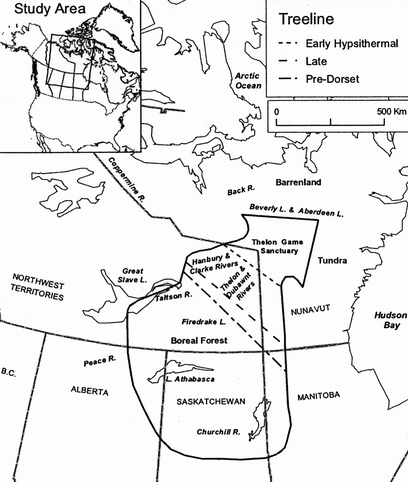 Lake (Fig. 1a). Hunting families moved seasonally between these places, intercepting herd migrations. Based on ethnographic accounts and our records of herd movement, tundra sites were occupied by hunters for a few weeks, while treeline and forest sites were often occupied for several months (Hearne 1958). Tundra site KjNb-7, used in mid-July each year for centuries, based on herd observations and radiocarbon dates, has the most complex palimpsests. Hunting bands of four archaeological traditions have occupied its seven floors, their movement tied to herd migration from a high, dry and windy northern calving ground to sheltered winter locations below the treeline. Under a warm stable climate the range had the largest number, variation and distribution of artifacts and sites in its Middle Taltheilei phase. Consequently, KjNb-7 has its heaviest palimpsest in that 1400-1800 year-old phase (Gordon 2006). Constant, frequent carcass processing resulted in palimpsests in all levels. Here, we consider what caused the 1800-2450 year-old Early Taltheilei palimpsest, made by ancestors of the Middle Taltheilei people. Their activities are alike, but Early Taltheilei occupation was lighter because there are fewer artifacts. This, plus its longer period of occupation, matches its pioneering role.

KjNb-7 is above the south shore of the Thelon River, opposite a huge V-shaped sand blowout 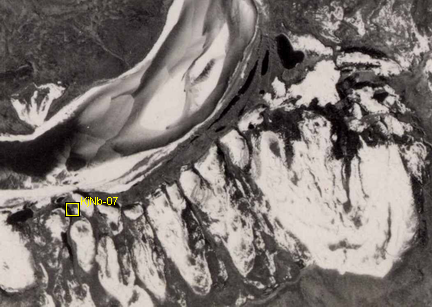 Figure 1b. Aerial Photograph of the Thelon River and site KjNb-7

(Fig.1b). Satellite sites, used in July when the herd did not cross directly to KjNb-7, are scattered east along an arc-like series of downriver sand blowouts. After the hunt, carcass gutting, quartering and skinning was accomplished on the shore away from camps, keeping them relatively safe from tundra predators, including grizzlies. Offal was thrown in the river to be carried away, leaving little to attract unwanted animals and birds.

Over three summers we observed herds crossing the river to the site in mid-July (Fig. 2). In 1976, when the photograph was taken, it was only a subherd compared to the huge herds over the next few days which often moved at night and went unrecorded. As the site’s seven levels span the last 6000 years, this is dramatic proof KjNb-7 was used for millennia. Confirming this striking visual proof are numerous caribou bones in all levels. Even after removing thousands of bones and flakes, the distribution remains a veritable cloud of artifacts (Fig. 3). Rather than leave it be in meaningless scattered skin scrapers and knapping debris, we decided to see if we could separate its different activities. 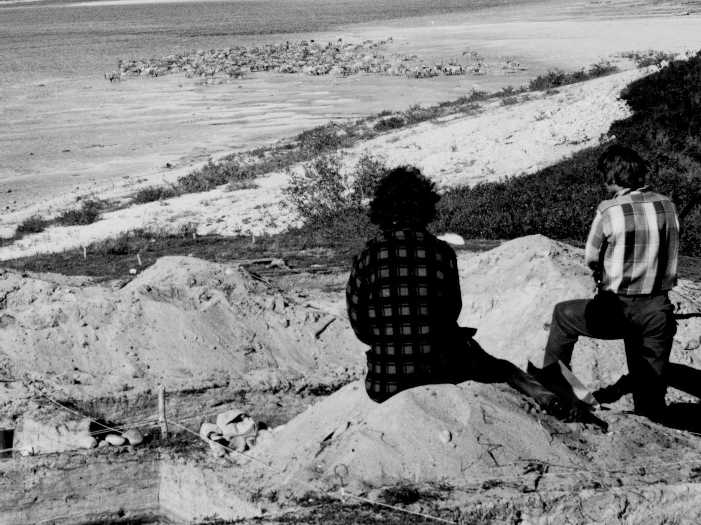 Assuming some artifact patterning was created and preserved in 650 years of use, we plotted quartzite core reduction, the resident’s first activity before herd arrival. With most finished tools removed for use, the remaining flakes, broken unused knives and core fragments were plotted. As the number of colours and hues was in the hundreds, we assumed that if all three were the same colour, they came from the same core. As knapping was a male activity, symbolic male icons were oriented according to right and left-handedness (5:1), with hammerstones right or left of the remains. Male shoulder widths are scaled to 45cm. Unlike Middle Taltheilei, we found only two main colours, beige (Fig. 4) and orange (Fig. 5). Other colours occurred but were too few to consider. Removing knapping artifacts greatly clarified the palimpsest. This was the first of seven techniques and the only one based on colour, which is unimportant in other activities.

The second sequential activity was lancing caribou when crossing the river (Fig. 6). As expected, no wooden shafts from that time were preserved, but the two spokeshaves may have been used to round the lance shafts. Most importantly, we have six complete lance heads which have ground bases, meaning they were ready for hafting and use. Another activity associated with lance production was lance head repair (Fig. 7). The 23 small triangles depicting lance head bases would normally be found in or near hearths due to the process of loosening broken lance heads with water and heat to liquefy the blood glue and sinew binding them to their shaft. As Barrenland hearths do not possess stone circles, and charcoal could have blown away before burial, hearths were absent so we plotted points separately, and where they were dense we placed an icon.

As the third activity plotted was butchering, we looked for worn knives used by women to cut meat from the long bones to slice thin for drying. This was done quickly to prevent spoilage, so bones were piled and fragmented later, while hides were temporarily wind dried. To represent butchering we added 14 icons of women with scaled shoulder widths of 35cm (Fig. 8). Sliced meat would have been placed on partial or full hides before drying on nearby bushes or tent walls, so space was allowed in each activity area for a 1x2m hide with knives on an arc of 60-120° representing part of the hide. In this scatterplot, more icons might be used in the central area.

The fourth activity was quick roasting of perishable non-marrow meat for immediate consumption (Fig.9). This would include brain and meat off the cranium, ribs, scapula, pelvi, vertebra and ankle bones that is not ideal for drying. Lacking hearths, we also looked for calcined bone, finding only two possibilities, and placing two female icons.

The fifth activity, grease extraction, was also hearth related (Fig.10). Here, we looked for hearths, uncalcined long bone fragments, fire-cracked rock and enough space for a birchbark boiling vessel or ground depression that would have been lined with rawhide and filled with water. We placed only three women in this graph, shown with a stick in one hand used for moving hot rocks from the fire to the water for boiling. Rocks were repeatedly transferred from fire to water until it boiled. Then, floating grease from the long bones was skimmed away to a bark or skin container, where it would later be mixed with dried meat powder and stored as pemmican. As the water filled with extracted long bone and fire-cracked rock, used bone and fragmented rock were thrown further right while intact rock was returned to the fire for reheating. This activity was rarely east of the fire because the dominant west wind (from left of plot) would render the grease unpalatable with ash and cinders.

The sixth activity was hide preparation and we plotted used chithos and scrapers (Fig.11). Chithos 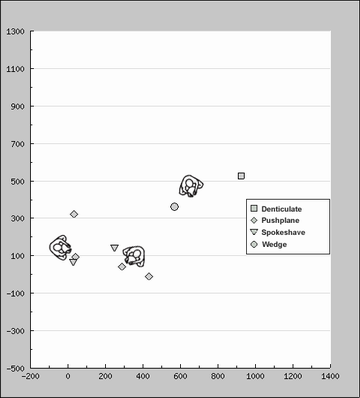 are thin rough sandstone disks used to soften and stretch hides by pulling them over the outstretched hide from its center like a huge scraper. Conceivably, scrapers and chithos would need to form at least a partial arc around a hypothetical hide oval void of 60-90cm. We added 11 female icons but it is possible that more are needed in the large central artifact cluster.

As our final activity was woodworking, we included a denticulate and a wedge used to cut and split spruce poles (Fig. 12). We added 3 pushplanes and 2 spokeshaves for shaping and rounding tool handles. This small number permitted only 3 male icons.

After all activities are plotted and no leftovers remain, we have split the palimpsest into gender-based activities of interest to all archaeologists because it enhances our study of ancient human behavior.

Acknowledgements: I thank Katherine Herbert for plotting the activities and editing.