Canada’s Barrenlands are bounded by the Mackenzie Valley, Arctic Ocean, Hudson Bay, and northerly regions of Manitoba and Saskatchewan. The Dene named it dechinule (“land of little sticks”), as their ancestors traversed both forest-fringe and tundra in seasonal search for migrating 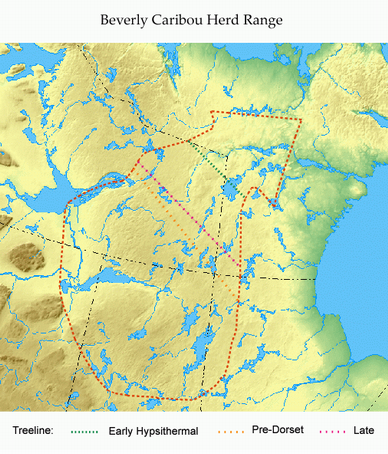 Four extensive caribou ranges continue to support the western Bluenose and Bathurst herds, and the eastern Beverly and Kaminuriak herds. Our study focus is on the hunter-prey interaction that evolved throughout the Beverly range.

By analysing tundra soils for a history of their floral composition – in particular, tree pollen and lichen spores – we detect periods of climate change that promoted or inhibited plant growth as a food source. Deglacial warming 5,000 to 7,000 years ago led to the northerly advance of treeline by two hundred kilometres (see map below). The resulting spread of tree lichens and fast-growing shrubs and grasses provided food for the first caribou. From 3,500 to 2,200 years ago, a very cold period reversed this advance, and a warming trend 750 years ago extended treeline once again to its present coverage.

Covering roughly 400 000 square kilometres, the Beverly range’s forested central drainage flows via the Thelon River to Baker Lake, Chesterfield Inlet and Hudson’s Bay. The north tundra drains via the Back River to Chantry Inlet; the south region feeds Artillery and Athabasca Lakes to Great Slave Lake and the Mackenzie River. The Thelon’s main tributary, that of the Dubawnt, drains a northeast-oriented valley parallel to that of the upper Thelon. Separate subherds of the Beverly caribou population migrate through each valley. The Beverly range’s surface composition is made up of boulders or glacial erratics, cobbles, and thin acid soil. Eskers, remnants of glacial rivers, snake their way across forest and tundra, serving as pathways for animal and man. Beach dunes and ridges mark 8,500 year-old shorelines of glacial lakes Thelon, Dubawnt and the east arm of Great Slave Lake. Beneath lie flat sandstone bedrock over Pre-Cambrian granite – some of the oldest rock in the world.

Caribou have adapted well to this environment, tolerating extreme temperature variation, short warm summers, and long cold winters. They thrive on sparse plant species on frozen soils and on arboreal lichens in the forest.

Following their habitual return to specific calving grounds each May, cows and calves are joined by bulls in late June and move to treeline. These vast herds split into subherds in August, and rutting subherds reappear in September and October at treeline, before returning to the forest as smaller winter subherds.

Despite changes in treeline already noted, location of the calving ground apparently has remained essentially the same for millennia. We know this because archaeological hunting sites do not extend beyond the modern calving grounds. Given their isolation from the three main predators of wolf (pupping further south), insect (not yet hatched) and man (most unable to read the calving grounds over unsafe spring ice on the lakes and river), calf survival was ensured. Hunters, on the other hand, were dependent upon the timetable and track of the herd’s migration, and each culture was limited geographically by the climatic conditions of its era.

Signs of human band and caribou herd affiliation have been accumulating since their emergence on the Barrenlands. These associations are made through study of artifact remains, primarily those of hunt-related tools. Many artifacts of varying dateline are found scattered upon hard-surface sites of human occupancy.

Fewer, but more important sites, have been preserved by the deposition of glacial lake sand deposited by the wind from adjacent dunefields. Their separation between levels permitted the identification and radiocarbon dating of tools used by subsequent hunting bands, with those at the bottom or two-metre level being 8000 years old.

The stratified site shown in this photograph provides a date-match to the artifacts of every culture that has occupied the Beverly caribou range over the last 8000 years. Using this key, we can assign culture-ownership to many surface artifacts that are found mixed with tools of other cultures One can safely assume that almost all surface sites have mixed components, especially those at water crossings where most or all cultures gathered each summer when the herds crossed the rivers.

Since 1970, my crews and I have recorded 1002 sites with 13,100 culturally assigned artifacts, most of which are on the tundra. The largest sites are just north of treeline and well beyond the winter range. They are also the most transiently occupied because the main herd crosses them over 2-3 days. Their size is due to the intense activity occurring during their short occupation, but in 24 hours of daylight.

Where are these sites?