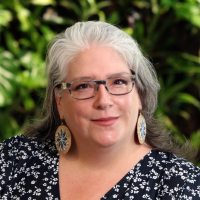 Linda Grussani (Kitigan Zibi Anishinabeg/Italian ancestry) is a curator and art historian born and raised on Anishinàbe Akì in the Ottawa area.

Grussani has spent over two decades working to advance Indigenous people, culture and arts, as well as promote positive structural change and advance Indigenous cultural diplomacy as a curator, arts administrator and academic. She is currently a doctoral candidate in the Cultural Studies program at Queen’s University.

Grussani most recently held the positions of Curator of Aboriginal Art at the Canadian Museum of History (CMH) and Director of the Indigenous Art Centre for Crown-Indigenous Relations and Northern Affairs Canada (CIRNAC). She has also worked in the Indigenous art department at the National Gallery of Canada.