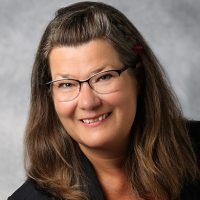 Nina Karhu brings over 20 years of Carleton centered experience as a past graduate student/TA, part-time employee, full-time staff employee and, is currently the Manager, Classroom Support and Development. She has a passion for education and research and with two children close to university age, she has a vested interest in doing what she can to promote Carleton University and to participate actively in its governance.

Nina holds two undergraduate degrees (University of Ottawa – Bachelor of Arts Honours in History, Co-op and Concentration in Music and a Bachelor of Music) and one graduate degree (Carleton University — Master’s of Arts in Canadian Studies). She was President of the Board of Directors for Centertown Parents Daycare for two years (2005-2007) wherein she successfully led contract negotiations with CUPE 2204 (encompassing ten daycares in the City of Ottawa) leading to a ratification of the Collective Agreement. In her role as Supervisor of the Kailash Mital Theatre and Carleton University Events Support on campus, she demonstrated excellent communications and budgetary skills along with an ability to focus on the larger picture while maintaining attention to detail. In her current management position, Nina is collaborating closely with groups outside of her department and as such she is gaining a wider perspective of Carleton as a whole.

Nina has been elected to the Board of Governors as an administrative staff representative for a three-year term commencing July 1, 2018 and ending June 30, 2021. Nina renewed her term term for an additional three years, which is now set to end on June 30, 2024.

Nina has also been interviewed for a governor spotlight – see what she had to say.