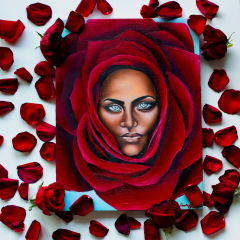 3omri, by Dorota Babiakova, is one of the creative pieces in this issue

Many would argue that McLuhan’s main legacy culminates in his prophecy about the “global village” and anticipation of the internet. In popular usage, the global village has become connotative of a techno-utopian vision, suggesting peace and harmony enabled by electronic communications. It has also raised concerns regarding the implications of this desired global unity for less powerful people, and its impact of homogenizing or even marginalizing cultures. While these concerns seem legitimate, they overshadow McLuhan’s other contributions to media studies.

McLuhan’s formula, “the medium is the message”, has had enduring influence in shaping academic understandings of what media are. The theory behind the formula is that media should not be merely assessed with regards to their effectiveness/ineffectiveness in delivering and storing content, but also as items that possess material conditions having influence on human perceptions and consciousness. To McLuhan, media such as the print encourages people to shape their perceptions in a linear manner compliant with the visual order of print, while sensorily rich media can help people rearrange their perceptions in a more active and organic manner.

The current issue, “Reimagine Race,” has emanated from the “Imagine Alternatives” assignment for the students enrolled in “Media, Race, and Ethnicity” class at the School of Journalism and Communication at Carleton University. The assignment was designed with a McLuhanian principle in mind: at a critical moment in which the Black Lives Matter and Stop Asian Hate movements have drawn attention to systematic racism experienced by minority communities in North America, it is important to remagine racial structures and relations through creative methods and multiple forms of media other than text-based modes of communication. The students were asked for this assignment to choose media they were good at making or comfortable working with for the purpose of exploring race and alternative racial relations and narratives.

In this collection, 11 students critique existing norms and narratives surrounding race and attempt to imagine race notions and relations in new ways through different modes of expressions. It is important to note that they do not try to move beyond racial politics to reimagine the world through a rosy prism. Instead, they invite us to recognize unattended and repeated forms of racism, especially in its intersectional forms as it combines with oppressions of gender, class, and other markers of identity. Relying on a variety of media, these creative contributions provoke thoughts and empathy pertinent to race and represent ideas and feelings in forms that can be read, seen, felt, or heard.

Imagination as explained by scholars of color such as Derrick Bell, the father of Critical Race Theory, and Ruha Benjamin  is not a type of luxury but a “battleground” for asserting power. By the act of re-imagining, we highlight injustices in our current conditions. We disturb current realities by causing – if not major overhauls – cracks and fissure in the oppressive systems. The originality of the commentaries presented in this issue resides in the use of imagination to explore new possibilities. They all seek to interrogate power and race relations from various vantage points and through new creative methods.

Heather Mclaughlin’s digital painting, “bad day,” reappropriates the sheriff’s comment on the Anti-Asian Atlanta shooing that the suspect was having a “bad day” by transforming the criminal into a monstrous form with multiple eyes to highlight both the systematic violence and consistent surveillance experienced by women, especially racialized women.

Further reflecting on the digital sphere, Tyreike Reid’s poem, “Hashtag Concrete”, shows the implications of hashtags such as those used during BLM for black communities when the poem, itself, sounds as a protestant’s chant. Continuing the use of poetry, Grace Perkunda, through a painting metaphor, shows how representation of people of color in media is not enough, and more of it is needed to be fair to their histories and rich experiences.

Arifah Baksh also utilizes collage to highlight the discrepancy between the coverage of Kate Middleton and Meghan Markle, which she traces back to Britain’s “stubbornly white” media and the lack of ethnic diversity in the country’s newsrooms.

Investigating racism in another European country, Ashee Pamma uses the medium of podcasting to comment on Charlie Hebdo’s racism through an analysis of the element of the body repeated in Charlie Hebdo’s caricatures to question their “psychopathic” tendencies.

Sheridan Worth’s sketch remodels the “pussyhat” used in Women’s March to challenge white feminism and turn the symbol into a more inclusive and intersectional one.

And finally, Dorota Babiakova celebrates femininity in its wide and heterogenous sense and challenges the common negative representation of Muslim women wearing hijabs with a painting portraying a women’s face with a red rose surrounding her and facial expressions that assert her agency.

All these creations are accompanied by essays from their creators highlighting their media’s messages and explaining the reasoning behind their media choice.