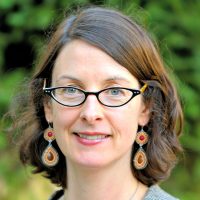 Kimberly Stratton received her B.A. degree (1991) in English and Religion from Barnard College in New York City. She completed a Master of Theological Studies at Harvard University (1995), concentrating on scripture and interpretation. In the middle of her master’s degree she studied in Israel at the Hebrew University of Jerusalem for a year and a half (1992-1994), where she passed the Hebrew Language Equivalency Exam (ptor). She returned to New York City to pursue doctoral studies at Columbia University, completing her Ph.D. (2002) in the History of Religions in Late Antiquity. Her research covers the fields of early Christianity, Rabbinic Judaism, as well as Greco-Roman culture and religion.

* Short-listed for Best First Book in the History of Religions Award, American    Academy of Religion, 2008

Special Issue on Violence and Communal Identity in Ancient Religions. History of Religions vol. 57, no. 1. August 2017.

Reading Exodus against Rome: Violence, Story, and the Origins of Judaism and Christianity (thee chapters drafted)

2017     Selected as a “Favourite Faculty Member” by students in the residence community.

2016    Guest Researcher at the University of Tübingen with the Sonderforschungsbereich 923 on “Threatened Orders,” June-July 2016.

2016    Selected as a “Favourite Faculty Member” by students in the residence community.