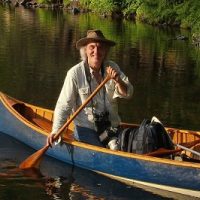 Michael Runtz is one of Canada’s most highly respected naturalists, nature photographers, and natural history authors. A birdwatcher since the age of five, he has lived, breathed and worked with Nature all his life. Professionally, Michael has worked as a naturalist in Canada’s national and provincial parks, and has performed numerous biological surveys ranging from birds and dragonflies to endangered species such as Peregrine Falcon and King Rail.

A dynamic communicator, Michael Runtz is equally at home in the television or radio studio, lecture hall or classroom. Since their inception, more than 60,000 students have signed up for Michael’s natural history courses. Video-streamed from Carleton University, Natural History remains the most popular course of its type in Canada. This popularity arises largely from Michael’s infectious and enthusiastic teaching style, for which he has received excellence in teaching awards from students and peers alike; on RateMyProfessor.com, Michael’s ratings are 4.7/5 and 5/5. He is in great demand as a speaker for groups as diverse as outdoor educators, professional biologists, school children, horticulturalists, and naturalists. Additionally, Michael hosted the international television series Wild by Nature, and is a popular guest on numerous television and radio shows such as CBC Radio Noon.

Fourteen natural history books bear the stamp of author Michael Runtz’s passion, knowledge and stunning photography: Moose Country, Algonquin Seasons, The Explorer’s Guide to Algonquin Park, Beauty and the Beasts: The Hidden World of Wildflowers, Wild Things: The Hidden World of Animals, Wild Wings: The Hidden World of Birds, The Howls of August: Encounters with Algonquin Wolves, The Revised Explorer’s Guide to Algonquin Park, Algonquin Souvenir, Natural History, Dam Builders: the natural history of beavers and their ponds, Algonquin Wild: a naturalist’s journey through the seasons, At Home with the Beaver: The Story of a Keystone Species, Wildflowers of Algonquin Provincial Park. In addition to his highly acclaimed books, Michael’s award-winning photographs and natural history columns grace the pages of many magazines and newspapers; his weekly column Nature’s Way has exceeded 1,200 instalments. Michael regularly posts natural history photos and commentaries on his Facebook page: Nature by Runtz.

Michael Runtz is also well known for his educational and conservation efforts, for which he has received numerous awards, including an Outstanding Service Award from the Federation of Ontario Naturalists, a Lifetime Achievement Award from Carleton University, and The Distinguished Public Education Award from the Canadian Council of University Biology Chairs. Michael was the only Canadian profiled – alongside such luminaries as Jane Goodall and Nelson Mandela – on the TVO/NHK Japan Superteachers series. But nowhere else is Michael more in his element than in the natural world itself – howling with the elusive wolf, digging out salamanders from under a rotting log, luring in rutting moose with his skillful calls, or capturing speeding dragonflies with his butterfly net. His intimate familiarity with this world makes Michael the perfect ambassador for Nature.