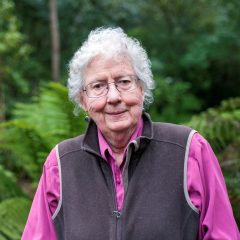 Carleton University has recently initiated an annual lecture series in honour of plant scientist, Dr. Margaret E. McCully, who was an extraordinary teacher and faculty member in the Carleton Biology Department for close to 35 years. Following her retirement in 1999, she moved to Australia where she continued her work. She is currently an honorary research scientist at CSIRO and visiting fellow at the Australian National University in Canberra. Margaret is internationally recognized for her pioneering work in microscopy and root anatomy and physiology.  The annual McCully lecture in Plant Biology is held in each year in the Spring. The theme of this lecture series is “from the lab to the field”. For more information, please contact Shelley Hepworth.

Dr. Rowan Sage, Professor of Ecology and Evolution at the University of Toronto. Dr. Sage obtained his doctorate from the University of California, Davis in 1986 and conducted post-doctoral studies at Desert Research Institute in Reno, Nevada from 1986-1987. He has been at the University of Toronto since 1993. His research addresses how plants are adapted to changing climates and atmospheric carbon dioxide levels. A well-known aspect of his work is the study of novel photosynthetic pathways – particularly the evolution of C4 photosynthesis. Evolution of this trait involves changes in leaf anatomy and physiology occurring dozens of times in flowering plants. Understanding the evolution of this complex trait provides a road map for the engineering of highly productive crops compatible with changing climates.

Dr. Maria Harrison, Boyce Thompson Institute for Plant Research, Cornell University. Dr. Harrison received her B.Sc. degree from the University of Newcastle Upon Tyne, UK in 1984 and her Ph.D. from the University of Manchester Institute of Science and Technology in 1987. In 2003, Dr. Harrison was appointed to the Boyce Thompson Institute at Cornell University where she is William H. Crocker Professor. Dr. Harrison is a pioneering plant biologist who studies how plants and fungi form symbiotic relationships to trade crucial nutrients that promote the survival of both species. She is especially well known for her work on arbuscular mycorrhizal soil fungi, which adopt a relationship with an estimated 80% of vascular plant families. Ultimately, this basic understanding will make it possible to better deploy symbiosis in the field for sustainable agriculture.

Dr. Lacey Samuels, University of British Columbia. Dr. Samuels received her B.Sc. degree from McGill in 1984 and her Ph.D. from UBC in 1989. After completing a post-doc at the University of Colorado, she obtained a faculty position at UBC in 2001. She went on to become Chair of the Botany Department and is a full professor. Dr. Samuels is a celebrated cell biologist whose innovative work using microscopy pushes boundaries in understanding how plant cells synthesis and secrete cell walls and surface coatings. More recently, Dr. Samuels has been delving into the cell biology of secretory trichomes found on the flowers of Cannabis sativa, which harbor a vast array of metabolites like terpenes and cannabinoids whose therapeutic functions we are only starting to understand.

Dr. William Plaxton. Queen’s University. Dr. Plaxton is a long-time friend of Dr. McCully from his days as an undergraduate and graduate student at Carleton University. Plaxton received his B.Sc. in Biochemistry in 1980 and a Ph.D. in Biochemistry in 1984. His supervisor was Dr. Ken Storey. Dr. Plaxton is now a professor in the Biology Department at Queen’s University in Kingston. He holds a Queen’s University Research Chair in Plant Biochemistry. He is widely considered one of the finest plant biochemists in Canada. His research focuses on understanding the organization and control of plant carbohydrate metabolism and the biochemical adaptations of phosphate-starved plants. Application of this work has the potential to reduce reliance on chemical fertilizers and boost production in crops.

From the lab to the field: research for sustainable agriculture

Dr. Frédérique C. Guinel. Wilfrid Laurier University. Dr. Guinel received her B.Sc. equivalent from institutions in France in 1975-1978, M.Sc. from the Université Pierre et Marie Curie in 1981, and Ph.D. from Carleton University in 1987. She has the distinction of being Dr. McCully’s very first Ph.D. student. Dr. Guinel is now a professor in the Biology Department at Wilfrid Laurier University in Waterloo. Over the years, she has served many leadership roles in Canada’s plant science community, including as past-president of the Canadian Botanical Association.  Her research focuses on the development and hormonal regulation of root symbiosis with soil microorganisms. The long-term goal of this work is to reduce the use of chemical fertilizers in agriculture.