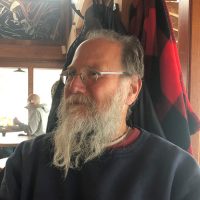 Our lab works on a diversity of topics, including evolutionary theory of sex, cactus morphology, academic freedom, palaeontology, mathematical biology, and Indigenous sciences.

With evolution of sex, we investigate evolutionary origins of meiosis, karyogamy, and seemingly illusory dichotomies between females and males. Theory and empirical work antithetically show that sex decreases genetic variation, whereas mitosis increases variation, turning a substantial portion of evolutionary theory on its head. This works seems to be consistent with feminist and LGBTQ+ perspectives.

Our work in cactus morphology, evolution, and ecology focuses on reproductive aspects, especially on unusual morphologies. In conjunction with miniscule effective populations sizes, this implies that many oddities in cacti are non-adaptive. Genetic drift has been given short shrift compared with selection in modern evolutionary theory. A focus on cacti grounds our research in what is a relatively ‘normal’. This research makes us better natural historians and classical botanists. We are also studying how maple trees make maple syrup and whether this is adaptive.

While philosophy is typically eschewed in science, our work has shown merit in considering Indigenous sciences, pluriversality, and why academic freedom should welcome Indigenous views (in general) and queer views on sex. Our finding that sex delineates individuals helps interject philosophy into biology.

Mathematical research in our lab has largely used discrete math. We are quantifying diversity and bizarreness of gerrymandered electoral districts. We are also extending models of two-locus physiological epistasis to an arbitrary number of loci, with the hunch that this will provide a large cryptic source of heritable variation, aka additive genetic variance.

Prospective students, graduate or undergraduate, interested in research in anything related to the above areas should contact me.

Gorelick R (2014) Indigenous sciences are not pseudoscience. Ideas in Ecology and Evolution 7: 43-55.