The European Union at Crossroads: A Perspective from Germany

The year 2016 is shaping up to be pivotal for Europe and Canadian-European relations. While Europe is faced with the ramifications of the “Brexit” referendum and the unprecedented influx of refugees, Canada and the EU are about to sign a new Strategic Partnership Agreement and a Comprehensive Economic and Trade Agreement. In his lecture, Minister of State Michael Roth will assess these developments and challenges from the perspective of the German Federal Government. 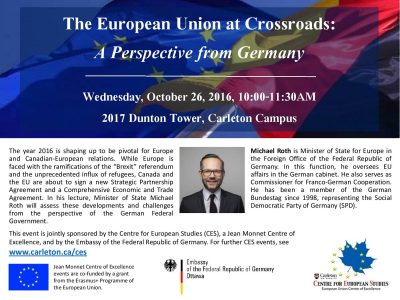 Michael Roth is Minister of State for Europe in the Foreign Office of the Federal Republic of Germany. In this function, he oversees EU affairs in the German cabinet. He also serves as Commissioner for Franco-German Cooperation. He has been a member of the German Bundestag since 1998, representing the Social Democratic Party of Germany (SPD).