As part of its commitment to serve as a national and international leader in the burgeoning field of Migration and Diaspora Studies, Carleton University is proud to support graduate research that explores the the social, economic, political and cultural implications of the movement of people and ideas. The winner of the 2015-16 TD Graduate Fellowship in Migration and Diaspora Studies is Ying-Ying Tiffany Liu from the Department of Sociology and Anthropology. 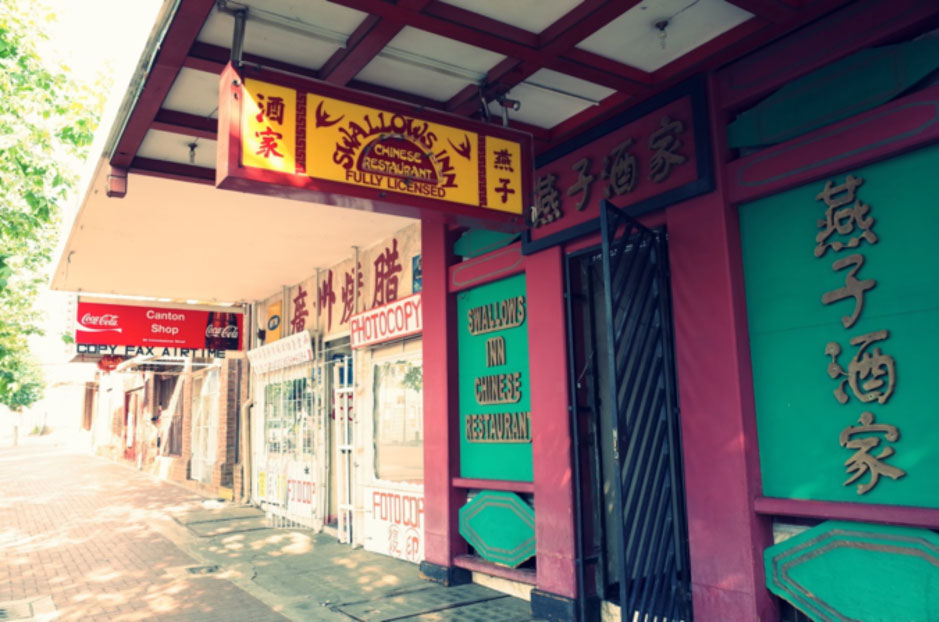 For her Ph.D. thesis, Ying-Ying Tiffany Liu spent 2015 working at a variety of Chinese restaurants across the city of Johannesburg in South Africa.

Liu jumped into this academic adventure while working as a visiting associate researcher at the University of Johannesburg, and carrying out ethnographic research about the intertwining of diaspora, transnationality, economic strategy, and cultural identity.

“In South Africa you find all kinds of people, food and culture that, for the most part, co-exist peacefully.” 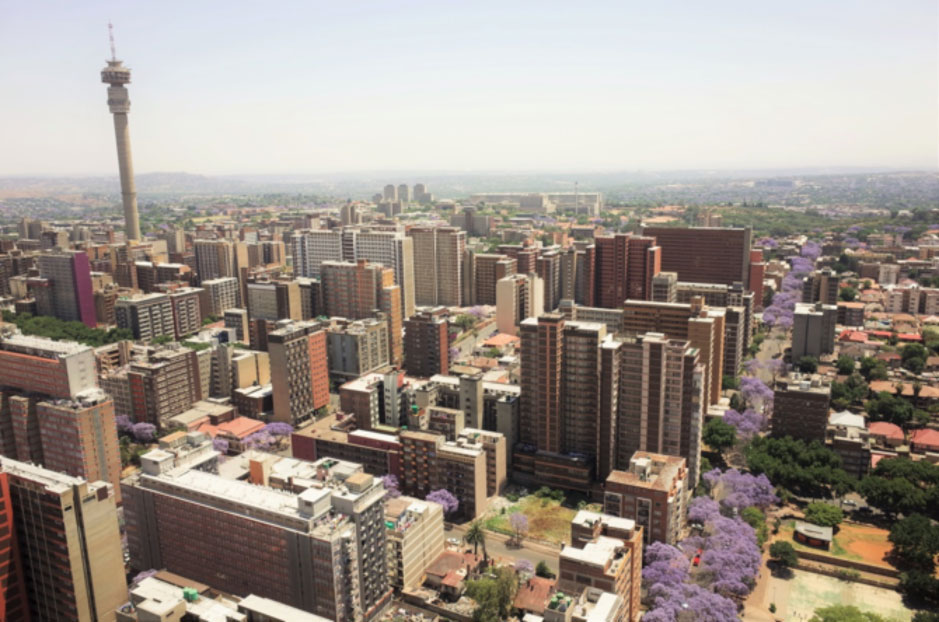 Liu quickly discovered that Johannesburg is full of “very hospitable, gracious, fun and energetic people with a great sense of humour.” She spent a great deal of her free time wandering around the city, visiting markets and taking photographs. One of her favourite sights to shoot was the pervading and colourful graffiti strewn throughout the city. 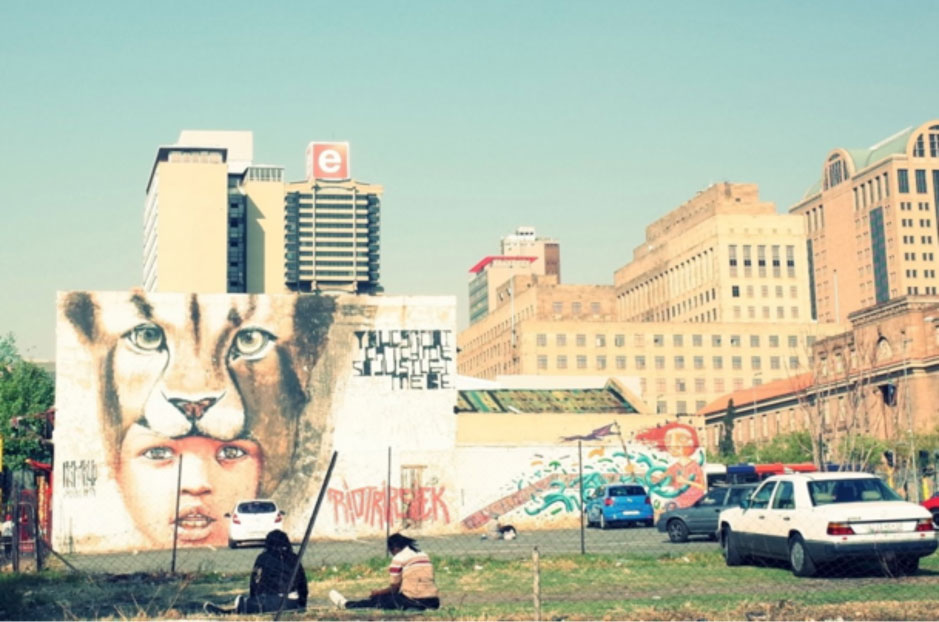 “Each piece of street art reminds me of how much creativity there is in this city and how much the ‘born-free’ generation – those who grew up after apartheid – want to communicate with the world,” says Liu. 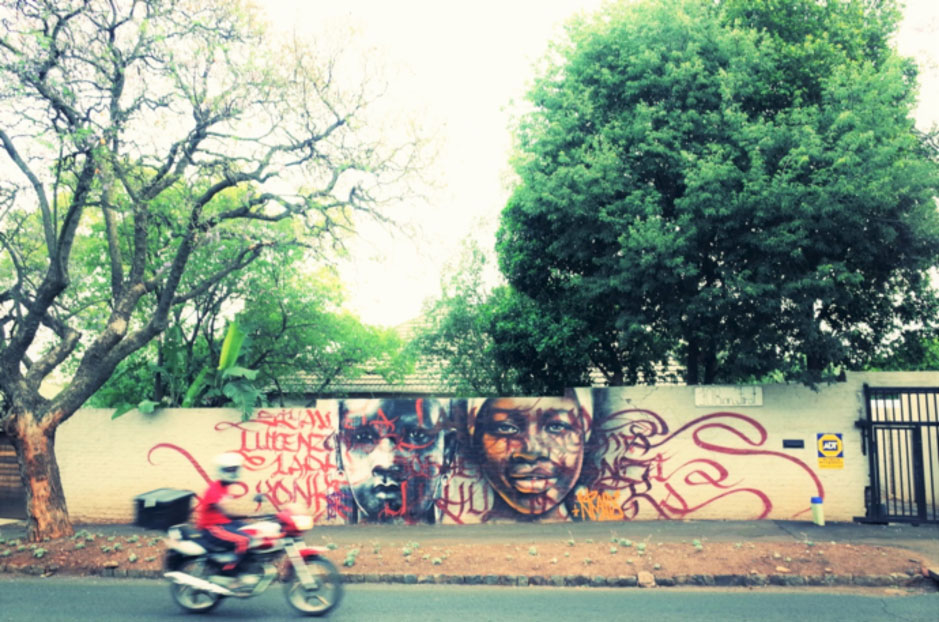 Graffiti in the suburb of Melville 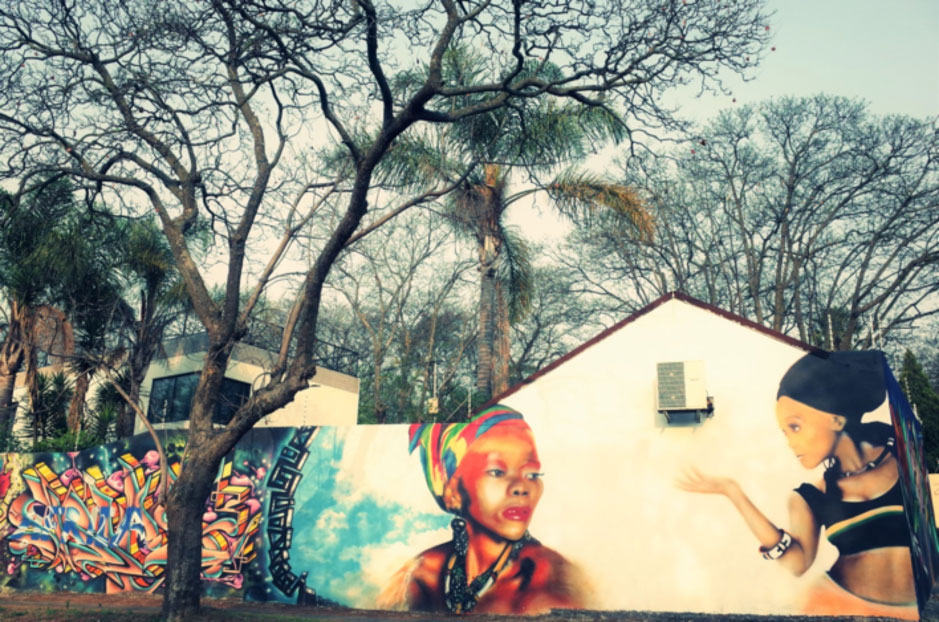 Graffiti in the suburb of Parkview

Though Liu describes a very tangible sense of optimism that exists today in Johannesburg, she is quick to remind us that South Africa is not without its obstacles. Despite the fall of apartheid in 1994, the country still faces widespread systemic poverty, racial inequality and a notoriously high crime rate. Both the harsher and gentler realities were reflected in Liu’s project.

“As a researcher of diaspora, 2015 was an interesting year to live in Johannesburg. I witnessed thousands of South Africans march against xenophobia, and I also met South Africans who told me foreigners should leave their country.” 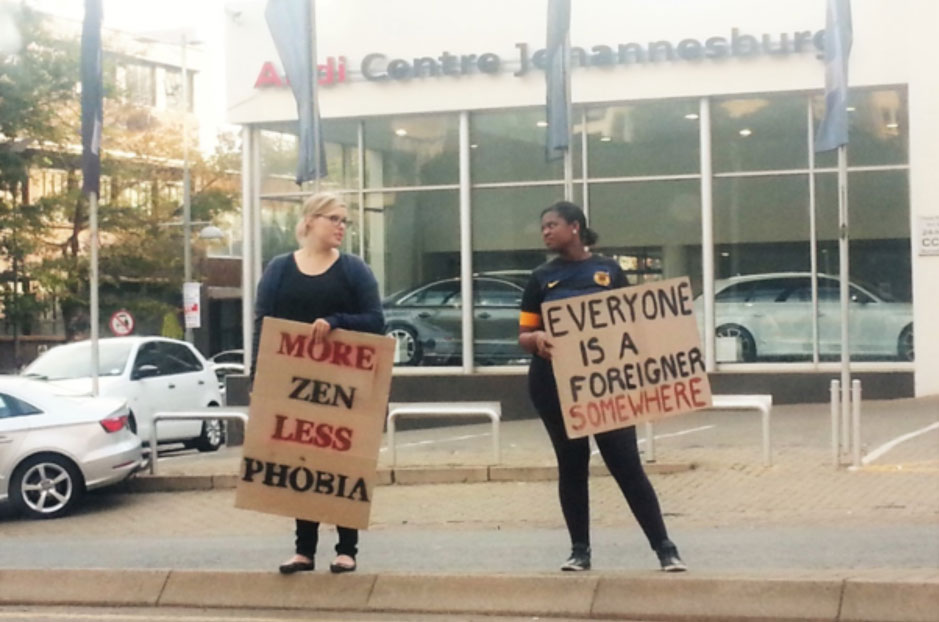 Liu has long-studied the many and diverse issues surrounding diasporic identity, but for her thesis, she wanted to look at a Chinese diaspora from a unique vantage point, one outside North America and Asia. She aspired to compare and contrast her previous, more local findings, with diasporic experiences in different regional contexts. This search for differentiation is what ultimately led her to South Africa. 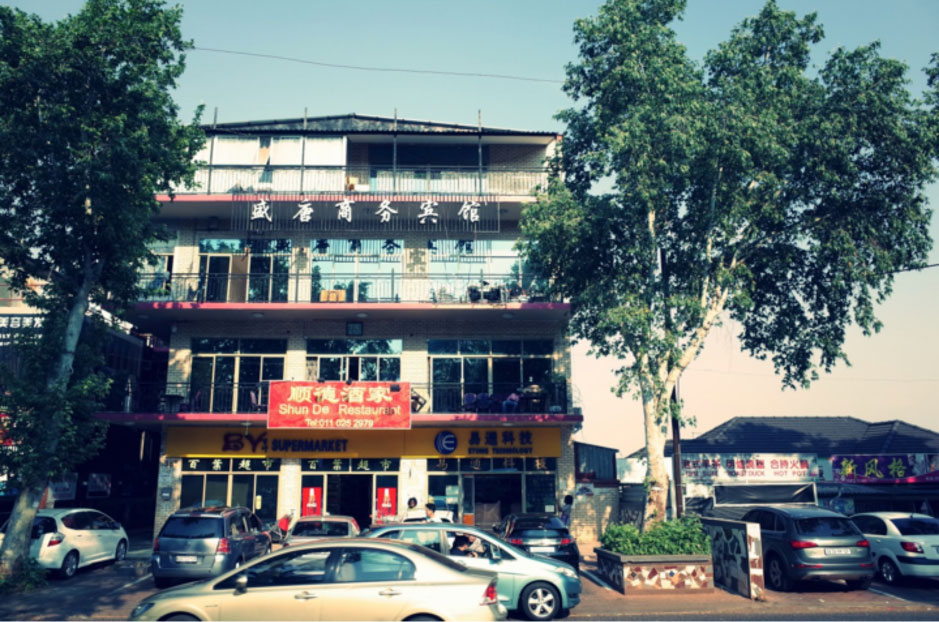 Johannesburg’s second Chinatown in the suburb of Cyrildene

“The unique historical and cultural conditions caught my attention,” explains Liu. “During apartheid, South Africa was arguably one of the most notable racialized states in the 20th century. This provides a concrete example to study race and ethnicity as a site of contestation, and to examine diasporic formation processes in terms of how these are mediated by issues of history, race, ethnicity, class, gender, and generation.” 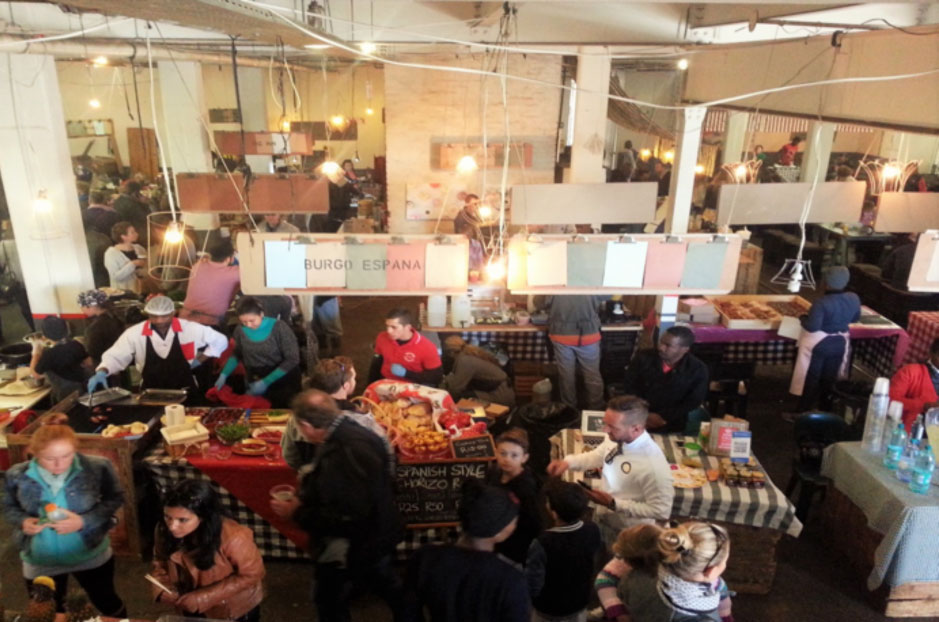 Liu notes that there “is a special correlation between food and diaspora for several reasons,” so she was unsurprised to learn that in South Africa, much like in Canada, many Chinese immigrants end up working in smaller scale businesses relevant to their cultural heritage.

Knowing this, Liu saw Chinese restaurants in Johannesburg as a very natural space to conduct her research. “Since food itself can be seen as a marker of cultural commodity, as an ethnic identity, and as an economic strategy, I situated my research project based on Chinese restaurants in South Africa as a productive site to examine how ethnic identities, economic practices, and local conditions meet and negotiate,” says Liu.

While performing her fieldwork, Liu noticed an interesting aside – the majority of kitchen helpers/workers were undocumented migrants from Zimbabwe. This is an economically rooted phenomenon, as Chinese business owners are able to pay Zimbabweans substantially less. “I use the term ‘intra-migrant economy’ as a first conceptual framing step to refer to the phenomenon that small business entrepreneurs employ primarily undocumented migrant workers as a ‘maximize profits strategy’ to avoid the host country’s labour laws and not having to pay minimum wage.” 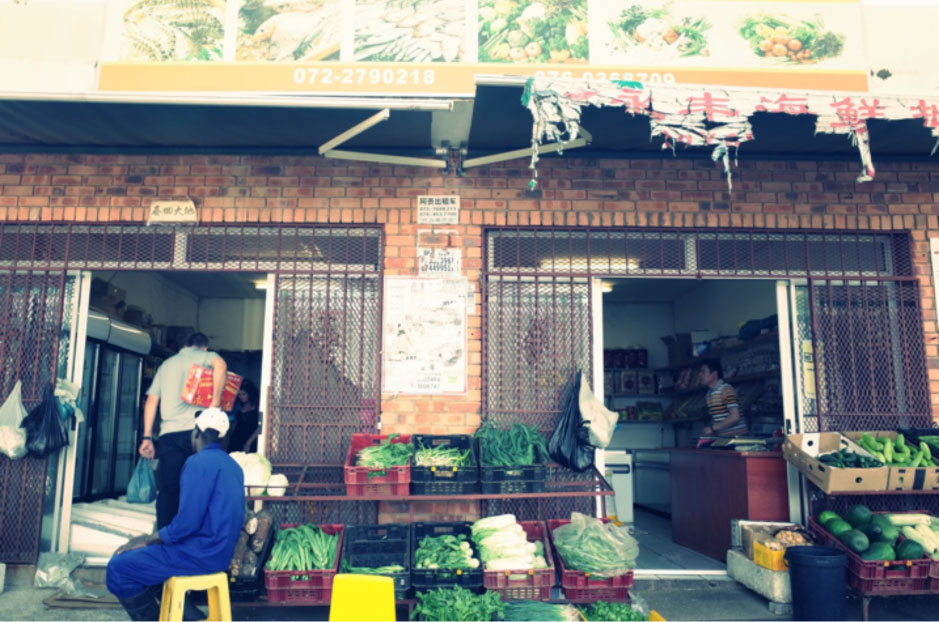 Liu explains that in a typical family run Chinese restaurant in South Africa, the husband cooks the food while the wife works as a cashier and/or server. Usually, a male relative makes sushi – a dish Liu was surprised to learn is very popular in the country – while three to five undocumented black workers prepare the food, do the dishes and complete other tasks which do not require a specialized skill. 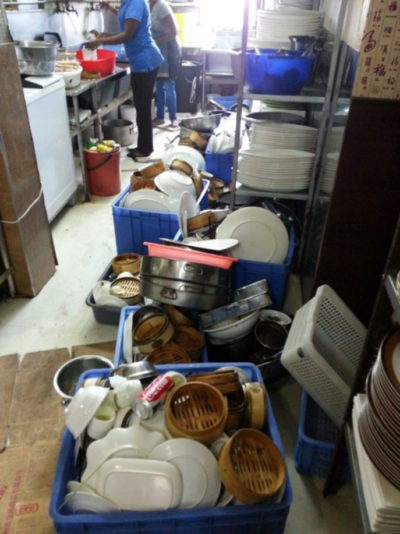 For undocumented migrants, the opportunity for employment is extremely limited, so business owners regularly exploit those who are in a desperate search for work. Inevitably, this results in a palpable tension between the Chinese and Zimbabwean working migrants, which subsequently added a major but unforeseen narrative to Liu’s research.

According to Liu, “the tense working relationship between Chinese employers and Zimbabwean employees reflects the criminalization of blackness which was fostered by South Africa’s apartheid past and current high crime rates.”

“After getting to know Zimbabweans’ diasporic stories, I realized that they also provide a crucial lens to explore South Africa’s social and economic structures, therefore, they must be included in my research in order to complete a full picture of diasporic entrepreneurship,” says Liu.

Though Liu’s work does offer a depiction of migrants’ lack of choice, it is also the story of resiliency in non-ideal situations.

“By exploring this phenomenon my purpose is not to focus on migrants’ unlawful behaviour but rather, to look at their uneasy living situations and how it should remind us not to underestimate the will found in many immigrant communities to pull through hard times” 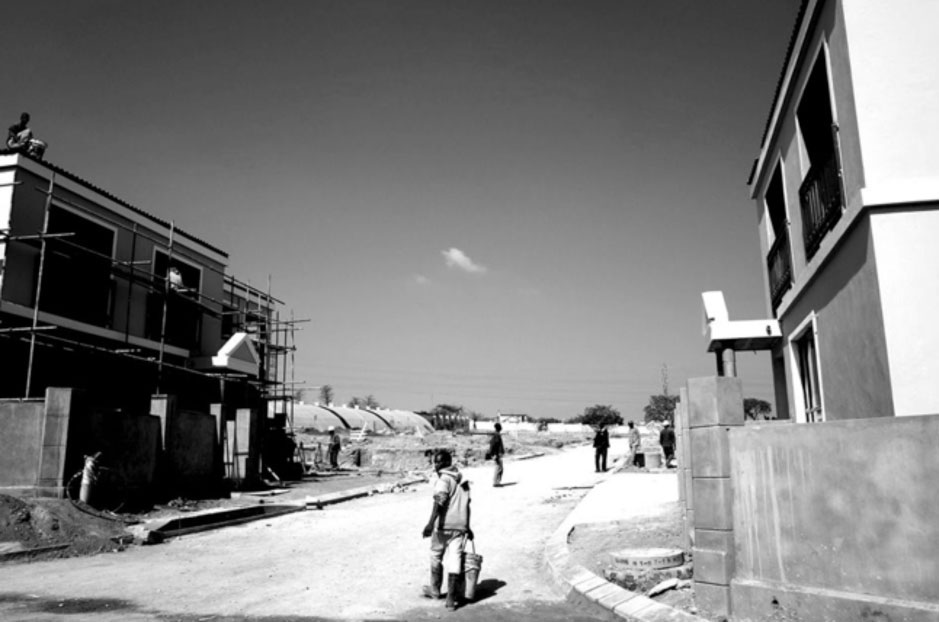 “The only reason Chinese-Zimbabwean ‘intra-migrant economy’ has survived and thrived is due to a demand for cheap and affordable Chinese restaurants in South Africa’s market.

“Mindful of well-publicized discussions about the economic consequences of immigration that appeal to xenophobic sentiments, I hope that my research will deepen our understanding of the realities of migration and diaspora. I envision my research joining other case studies of diaspora that help to shape public policy discussions by forcing us to re-think and re-examine our taken-for-granted assumptions about borders, citizenship, and nation-states.”

Liu’s research is still “in-progress” and with support from the Department of Sociology and Anthropology and the Migration and Diaspora Studies fellowship, she will return to South Africa this summer to obtain more data. She also continues to rely on her supervisor, Dr. Blair Rutherford, of the Institute of African Studies to provide wisdom, experience and research guidance. Rutherford is an expert in Zimbabwean culture and political economy, and has been a stalwart for Liu since the beginning of her project.

The takeaways from Liu’s experiences were hardly black and white, but after a year in Johannesburg, she does feel like she has walked away from this juncture of her research a little wiser.

“All of these complex and sometimes contradictory experiences have given me the exposure and chance to gain a deep understanding of South Africa, which has also taught me invaluable life lessons,” says Liu.

At the Carleton Dominion-Chalmers Centre, the stage expansion is finished, the Ottawa Symphony Orchestra is on board as a partner, and music will be a large part of programming going forward.

Celebrated Italian actor and storyteller, Mario Pirovano, felt it was his duty to translate Lu Santo Jullare Francesco from Italian to English. This play was written by his mentor and theatre legend, Dario Fo, winner... More