Carleton University students and researchers are working on innovative projects involving interactive technologies applied to public areas around Ottawa, including Confederation and Landsdowne parks. Carleton’s Hyperlab, a digital humanities research centre, has made projects like these possible.

The lab’s most recent project involves an exploration of Lansdowne, past, present and future. This historical landmark, which shaped the social and cultural life of early Ottawa, is undergoing a dramatic redevelopment. Lab researchers are planning to create a mobile app that enables visitors to explore the park’s rich history and re-imagine its future as a public space.

It’s just the latest in a long line of interactive projects that give students hands-on experience.

“Hyperlab students have already developed locative games for education, critical tourism and heritage conservation that use real city spaces as a platform,” said Brian Greenspan, the Hyperlab’s founding director. “A stroll through Confederation Park becomes a quest for historical artifacts from early Bytown, the Arboretum is transformed into a literary haunted house, and Carleton’s campus becomes a dystopian zone populated by student zombies. Players navigate the city and game space simultaneously, searching for the right path while avoiding both real and virtual obstacles.”

Hyperlab students have already developed locative games for education, critical tourism and heritage conservation that use real city spaces as a platform 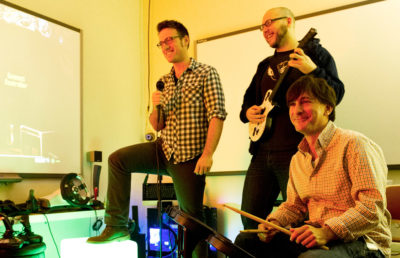 Phil Horwitz, MA/11 (with microphone), doctoral candidate Adam Benn, and hyperlab director Brian Greenspan, seated, inside the Hypertext and Hypermedia Lab at Carleton. They’re shown here in a twinned spread in front of a smart board with gaming equipment.

The Heritage Passages project focused on Confederation Park and the Rideau Canal. The Hyperlab’s task was to create a locative live museum app, where users could experience some of the digitized artifacts from the online exhibit at the canal site itself using a mobile device.

In connection to this project, students at the lab created a game called the Forgotten Worker Quest designed for 8-to 12-year-olds. Young players visiting the canal can access the game on a mobile device to play the role of an 1820s immigrant worker. Participants locate tools and complete tasks while avoiding explosions and malaria outbreaks. Based on actual Bytown history, it is a scavenger hunt, history lesson and interactive tour of the canal site all in one.

In operation since 2008, the Hyperlab is a digital humanities research centre in which students use new digital tools to explore traditional humanities objects and subjects, or bring critical humanities approaches to projects involving new digital media and culture. 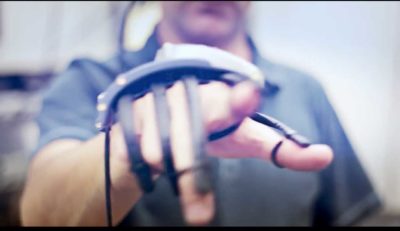 “The lab supports students from a variety of disciplines, including music, sociology, game studies, theatre and film, who have projects involving a digital element but who seem to have fallen between the cracks. The lab has become an incredibly interdisciplinary centre as a result of these diverse students bringing together their particular expertise,” said Greenspan.

BACKGROUND:
The Hyperlab is a centre for graduate-level research in the digital humanities, where students explore new ways of telling stories with new media like ebooks, video games and mobile devices. The lab’s team has developed tools for the rapid prototyping and development of mobile apps that use GPS and location-based services to deliver site-specific information to users. Their spatial storytelling apps let users experience rich multimedia narratives that follow them along and shift perspective as they navigate the real world. The Hyperlab was built with grants from the Canada Foundation for Innovation and the Social Sciences and Humanities Research Council of Canada.

Students Faten al-Athari and Calla Tait share their life-changing experience during their placements at Sophia House working with children who are new to Canada.

A professor in the College of the Humanities and the Department of English has made an amazing discovery that sheds new light on the political influence of one of King Henry VIII’s wives. Micheline White,... More

Erin Shields identifies as a major of Carleton’s English Department, a contributor to The Globe and Mail, a recipient of the 2016 Killam Undergraduate Fellowship, and one of two Distinguished Scholars for the entering class... More