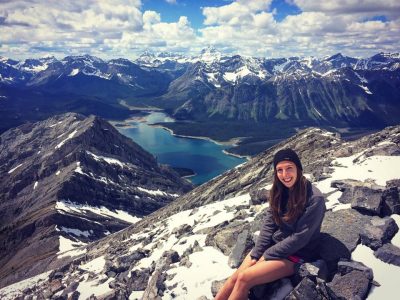 This past summer, Stephanie Lonz, a fourth-year Honours student in Geography and Environmental Studies was one of 14 recipients of the Faculty of Arts and Social Science Undergraduate Summer Research Internship Awards. These internships provide funding to top undergraduate students in order to conduct original research. This is her report from the field.

For four years I lived in Banff National Park. During that time, I became more aware of, and interested in, the impacts of tourism. I saw firsthand the result of exploding levels of visitors in the park, from traffic congestion in the park to visitors feeding and disturbing wildlife. When the 2017 Discovery Pass was announced my first thought was how would already congested parks, such as Banff, cope with the potential increase in visitations. This issue reflects an ongoing debate about how we should use our parks: to preserve but use or protect and leave as wildernesses.

I personally struggle with wanting to promote increased access to our parks while simultaneously thinking about how our parks would fair if left undisturbed by development and tourism. This prompted me to propose researching the Discovery Pass to see if there were any correlations between the ecological integrity of our parks and increase usage. My proposed research examined whether this pass was a good policy and focused on three main questions: Did the Free Pass trigger increases in Park visitations? Did the increase in Park visitations result in higher adverse environmental impacts? Were the increases in visitation and enforcement actions more associated with already ecologically fragile parks? 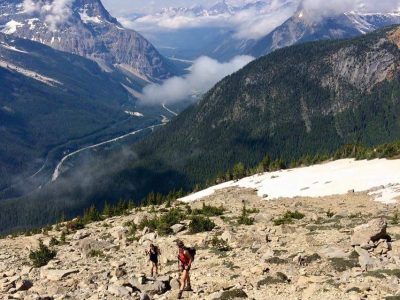 Research results showed that the 2017 Discovery Pass did, in fact, trigger an increase in national park visitations overall. Our mountain parks – Banff, Jasper and Yoho – accounted for more than 55 percent of all national park visits. Banff National Park alone recorded a 120,000-visit increase in 2017 from 2016.

Rates of enforcement action were then compared to the previous year in order to evaluate changes in human behaviour in the park and the environmental impacts of increased visitations. Overall, there was a 17 percent increase in incidents from 2016 to 2017 nationally. Looking strictly at some of the three mountain parks, enforcement warnings issued under camping regulations saw the greatest increases in 2017 although warnings filed under wildlife regulations, such as feeding or disturbing wildlife, recorded an increase of 38 percent from 2016.  Statistical analysis further showed a strong positive correlation between visitation and enforcement rates.

Finally, these enforcement rates were assessed against reported park ecological conditions. The results suggested that it may not be possible to correlate reported deterioration of ecological integrity of park ecosystems against enforcement rates or increased visitation. Several confounding factors were revealed that needed to be considered that could have impacted the data, such as increased staff in the parks issuing warnings during that season. However, the 2018 assessment of park conditions reported significant deterioration of ecological conditions in the mountain parks in 2017, suggesting a possible relationship between use and ecological damage. 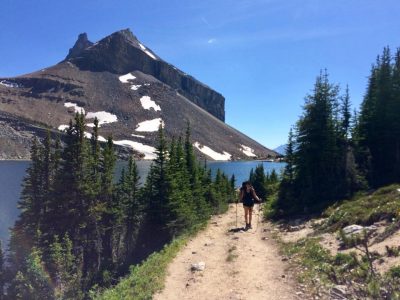 From my research there was no clear answer as to whether the Discovery Pass was good policy. From a use perspective, it did result in greater visibility and visit. However, from an environmental policy viewpoint, the results are less clear. Further research is required to determine whether the reported deterioration in ecosystem integrity is primarily a result of use or is due to other factors such as climate change.