Congratulations Postdoctoral Fellow Romola Thumbadoo on recently being published in the International Journal of Arts, Humanities and Social Science 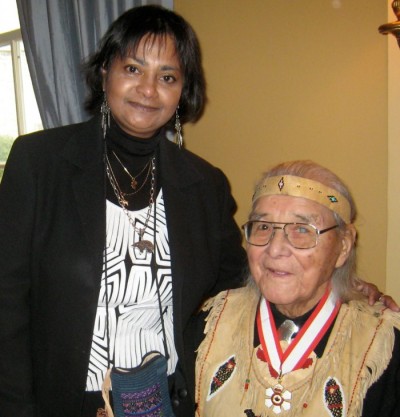 William Commanda (1913 – 2011), Indigenous leader, recipient of two honorary doctorate degrees, and subject of a thesis on his environmental legacy (Thumbadoo 2017), was carrier of wampum shell belts of Algonquin heritage; these are ancient mnemonic conceptual devices of spiritual, historical, narrative and record-keeping importance that underlie his cognitive mapping practice.

Cognitive cartography is a relatively new field of inquiry in the social sciences, initiated via cognitive psychology, and today, multidisciplinary research is undertaken by neuroscientists, geographers, anthropologists, computer and information scientists as well as psychologists.  Research is dominated by location-based theories that explore how we acquire, learn, code, process, store and decode information related to the geographic world and how we use this knowledge to make spatial choices and decisions. Yet Indigenous thinking suggests that geographical acuity requires the intersection and integration of cosmic, temporal and spatial knowledge, and further, that this is of critical importance in these times of dramatic earth and climate change.

William Commanda was a much-travelled and respected Indigenous leader and canoe-maker. He identified himself as Mamiwinini; he translated this to mean we travel every day; we always move. Thus, motion played a critical role in his cognitive map. During contemporary times, guided by the prophetic heritage of his ancestors, embedded in the concept Ginawaydaganuc, Everything is related, he mapped his traditional homeland of North America, known to his people as Turtle Island, through numerous journeys, social and political activism, language and cybernetic influential storytelling, demonstrating reflexivity, performance, agency and geo-narrative animation.

This paper, following the trajectory of post-representational theory, examines the role that two contemporary spatial and temporal cartographic innovations, the cybercartographic digital atlas (Taylor et al) and social media, and cybernetics play in integrating place, time and movement on the land, concomitant with interrelationship with the sensory, observational and experiential, in William Commanda’s cognitive mapping practice.