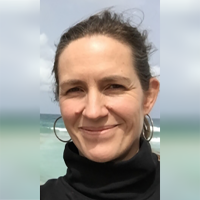 Diana Allan holds a Ph.D. from Harvard University and is Assistant Professor in the Department of Anthropology and the Institute for the Study of International Development at McGill. She is an anthropologist and filmmaker who received her training at Harvard’s Sensory Ethnography Lab, and is the creator of two grassroots media collectives in Lebanon, the Nakba Archive and Lens on Lebanon. Her ethnography, Refugees of the Revolution: Experiences of Palestinian Exile (Stanford University Press, 2014) won the 2014 MEMO Palestine academic book award and the 2015 Middle East Section Award at the American Anthropological Association. She was a recipient of a 2013 Guggenheim Fellowship in anthropology and film, and her ethnographic films Chatila, Beirut (2001), Still Life (2007), Nakba Archive Excerpts (2008), Fire Under Ash (2009), Terrace of the Sea (2010), and So Dear, So Lovely (2018) have screened in international film festivals and as gallery installations. Her current research projects––both written and filmic––explore the politics of Beirut’s informal economy and Palestinian littoral life, past and present. In 2022, Allan collaborated on a photography exhibition on the historic souqs of Palestine, titled Souq Stories: Reclaiming the Commons. She is currently editing a collection of essays on the Nakba Archive (“Voices of the Nakba: A living history of Palestine, forthcoming, September 2021, Pluto Books).