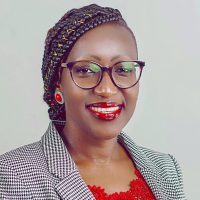 Ms Janemary Ruhundwa, the co-founder and currently the Executive Director at DIGNITY Kwanza, has over 13 years of experience in diverse areas, including refugee rights, nationality rights, migration and development, and NGO management. Before founding DIGNITY Kwanza, she served as the Country Director of Asylum Access Tanzania (AATZ), the then national office of Asylum Access, Assistant Protection Officer at UNHCR Tanzania, and An Assistant Lecturer at Tumaini University. She is currently the co-founder and the chair of the Tanzania Refugee and Migration Network (TAREMINET) and a member of the National Anti-Trafficking Committee.

Ms Ruhundwa holds an LLM and LLB from the University of Dar es Salaam, a Diploma in International Relations and Diplomacy from the Center for Foreign Relations, and a Human Rights Certificate from Malmo University (Sweden). She is a Tanganyika Law Society member, an Acumen Fellow 2014, and International Visitors Leadership Program and a TEDxIlala 2015 speaker. Ms Ruhundwa co-authored “Between a Rock and Hard Place – Urban Refugees in Tanzania” (published in the Africa law Today, Vol. 4, Issue 1 (2012)), and speaks in various national and international forums and provided opinions on issues on refugees, migration and statelessness in Tanzania. Ms Ruhundwa was also a lead counsel in the landmark case on citizenship rights.