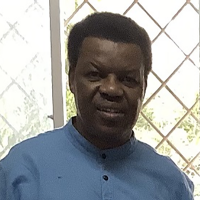 Dr. Khoti Chilomba Kamanga is an Associate Professor affiliated to the Department of Public Law at the University of Dar Es Salaam. From 1998-2012, Professor Kamanga served as Coordinator of the Center for the Study of Forced Migration (CSFM), which he helped co-found in 1995. Dr. Kamanga is a distinguished academic in the fields of International Law, International Humanitarian Law and Law of Regional Integration. He holds a Master of Laws degree (With Distinction), and Ph.D. from Patrice Lumumba University, Moscow, Russia. He also holds Master of Laws in European Union Law from Universiteit van Amsterdam, The Netherlands.

In addition to extensive involvement with the university, Prof. Kamanga has had active engagement in various capacities outside the University. For instance, he is a member of the International Law Association (ILA) and Interim Secretary, of the ILA East Africa Branch (www.ila.org). For two consecutive terms, he was elected to the position of Secretary of the International Association for the Study of Forced Migration (www.iasfm.org) He represents the UDSM School of Law on the National Committee on the Prevention of Genocide and Mass Atrocities and Tanzania Refugee and Migration Network (TAREMINET). He is a Resource Person for a number of institutions including the Geneva based International Committee of the Red Cross (ICRC) Prof. Kamanga is a member of editorial boards of two international scholarly journals: the Oxford based Journal of Refugee Studies, and the African Yearbook of International Humanitarian Law, published from the University of Witswaterand, Johannesburg. Prof. Kamanga’s external academic engagements include being a Guest Lecturer, at the University of Malmo Sweden (2005-2010) and external examiner, of the University of Makerere, and University of Nairobi. He is a life member of the Tanzania Red Cross Society, a founding member of International Criminal Law Network, and International Humanitarian Law Roundtable for East African Lecturers. Professor Kamanga speaks four languages: Kiswahili, English, Russian and rudimentary French.

Prof. Kamanga has published extensively on international law in Tanzania, forced displacement in East Africa, refugee law and policy in Tanzania, and the East African Community. Recently, Dr. Kamanga published an op-ed in The Citizen, one of Tanzania’s leading English-language newspapers, reflecting on the 50th anniversary of the 1969 OAU Convention Governing the Specific Aspects of Refugee Problems in Africa. He has also acted as a consultant for various organizations has received numerous awards for his work.

On 2 October 2019, Khoti Kamanga, co-founder of the Centre for the Study of Forced Migration at the University of Dar es Salaam, and Co-Applicant for LERRN, published an op-ed in The Citizen, one of Tanzania’s leading... More