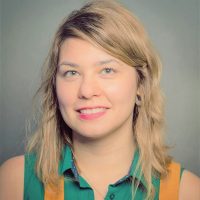 Muzna Dureid is Policy Analyst and Humanitarian Practitioner who arrived in Montreal in November 2016. On her journey to Canada, she was involved actively in multiple initiatives and networks focusing on child and forced marriage issues among Syrian refugees since 2012 when the first wave of Syrian refugees fled to the neighboring countries by founding “Women Refugees, not Captives, a campaign” aiming to end forced and child marriages of Syrian women refugee and girls. Muzna is an MA student in Public Policy and Public Administration at Concordia University. she is the liaison officer at The White Helmets (the winner of an alternative Nobel prize for peace in 2016). Recently, she is coordinating COVID-19 related project to produce PPE locally in North West Syria at the White Helmets manufacture.

Muzna also advocates for the diaspora women’s refugee political participation. She is a co-founder of the Syrian women’s political movement to engage Syrian women in politics and peace talks and shape Syria’s future. She is a Policy Advisor in Canada/Syria relations. She serves as a consultant on WPS at Women, Peace, and Security Network – Canada. She’s Youth Advisor at senator Mcphedran’s Youth Council. Dureid is the founder of the Indigenous – Refugees movement is a series of workshops for Youth on lessons learned between both groups which aim to build stronger bonds in Canada by learning the truth and resilience.

She is a winner of the Canadian Excellence in global Women and Children’s Health award for the young category of 2019. She is the recipient of The Canadian Association of Refugee Lawyers annual award for outstanding Advocacy on behalf of the human rights of Refugees. Muzna is a member of Gender Innovation Agora (GIA) at UN WOMEN. Muzna is a board member of CARE Women’s Advisory Board for Advocacy (WABA) and a member of Refugee Advisory Network.