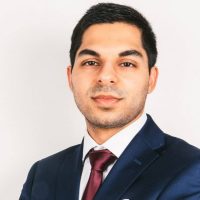 As a student with a passion for international law, the Juris Doctor/Master of Arts (International Affairs) dual-degree was a perfect fit for Ali Tejpar.

“The program was fantastic. Not only do you learn about the law and international relations, but you have the opportunity to pursue placements you can’t get anywhere else in the country,” says Tejpar, who earned his degrees in 2018 and is now completing his articling at the Ottawa office of Norton Rose Fulbright, a leading global law firm.

“I wrote a paper on Canada’s trade relations with the European Union and a few months later, I was completing a co-op at Global Affairs Canada’s Trade Policy and Negotiations Division,” he recalls. “I was able to support Canada’s trade negotiations with Chile, the EU, Israel, Korea, and Ukraine.”

The JD/MA degree begins with a year at uOttawa’s Faculty of Law, followed by a year at NPSIA, and then two years completing both degrees. Towards the end of his studies, Tejpar was able to return to Global Affairs Canada—this time in the Treaty Law Division.

“It was amazing; I was writing legal opinions and memos to the Minister of Foreign Affairs and Canada’s Ambassador to the United Nations on recommended diplomatic and treaty responses,” says Tejpar. “It required an understanding of international law, international relations, and global politics—topics that my degrees helped me better understand and work with.”

Over the course of his studies, Tejpar has also published eight academic articles and been recognized with thirty awards for academic excellence and community leadership. He had the opportunity to present his research at academic conferences in Atlanta, Montreal, and Prague.

“NPSIA is a top international affairs program. It really set me up for the future,” he says.

Today, Tejpar works with clients all over the world at Norton Rose Fulbright and will be called to the bar in June 2019. He is also a well-known advocate for Youth Ottawa and the Ismaili Council for Canada.

Last year, he received the United Way Community Builder Award and the Mayor’s City Builder Award for his volunteer efforts, which included organizing the Mayor for a Day contest and hosting workshops on financial literacy, entrepreneurship, and leadership for immigrants and newcomers. Tejpar says he is motivated by a sense of duty to the community. 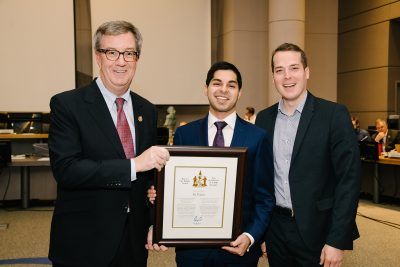 “Voluntary service is incredibly valued in the Ismaili community,” explains Tejpar, who counts himself as a member. “There is a great sense of duty to use your education for social good and in the service of others.”

As a youth advocate, Tejpar also offers this advice to current students: “You create your own opportunities. Positions are not always advertised, so you have to take the initiative and ask how you can get involved.”