Adjunct Research Professor and Director of the Parliamentary Internship Programme 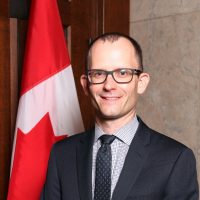 Adjunct Research Professor and Director of the Parliamentary Internship Programme

Dr. Paul Thomas is the Director of the Parliamentary Internship Programme (PIP), an educational initiative of the Canadian Political Science Association that each year gives 10 recent university graduates the opportunity to work for both government and opposition MPs. He is also an Adjunct Research Professor with Department of Political Science and the Clayton H. Riddell Graduate Programme in Political Management at Carleton University.

Paul has spent more than a decade working in and researching British and Canadian politics. After completing the Parliamentary Internship Programme and serving as a researcher for Senator Yoine Goldstein, Paul relocated to London to work in government relations for Cancer Research UK. He then completed a PhD in Political Science at the University of Toronto and a SSHRC Postdoctoral Fellowship at Carleton University. Prior to becoming PIP Director, Paul served as a Senior Research Associate at the Samara Centre for Democracy, an organization dedicated to strengthening Canadian Democracy through research and public engagement.

Paul has published several articles and book chapters on legislative politics in Canada and the UK, and co-authored the book Religion and Canadian Party Politics. He serves on the board of the Canadian Study of Parliament Group.