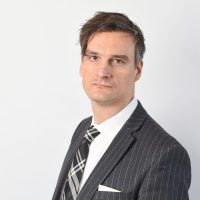 Yaroslav Baran is a partner with the Earnscliffe Strategy Group in Ottawa, where he leads the company’s Communications practice, dedicating energies to strategic communications advice, crisis management, executive speech writing and presentation coaching. He also leads Earnscliffe’s media relations training practice in Ottawa. He also advises many clients on government relations, and is also Earnscliffe’s senior parliamentary advisor with an esoteric understanding of House of Commons procedure.

Yaroslav joined Earnscliffe after more than a decade of government experience in political communications and parliamentary affairs, having served most recently with the federal government as Chief of Staff to the Government House Leader.

He was the Communications chief for former prime minister Stephen Harper’s leadership campaign, and directed the Conservative Party’s communications and media relations through three national election campaigns – 2004, 2006 and 2008 – as Senior Communications Advisor and Director of War Room Communications.

In addition to his governmental and public affairs work, Mr. Baran has also helped lead a number of democratic development projects, from Eastern Europe to Africa to Southeast Asia.  He is vice-chair of the board of directors of the Parliamentary Centre, an Ottawa based democratic development NGO.  He is also a director with the charitable Canada-Ukraine Foundation which is involved in capacity building and humanitarian projects.

He has been a repeat guest lecturer with the Masters of Public Administration program at Queen’s University, focusing on the relationship between political staff and the public service as it pertains to communications.  He has also been a guest speaker for the World Economic Forum.  He was named a Fellow with the Clayton H. Riddell Graduate Program in Political Management at Carleton University in 2019.

The Hamilton native is a frequent media commentator on crisis management, geopolitics and federal political affairs.